Review: ‘Wolverine and the X-Men – Revelation’ 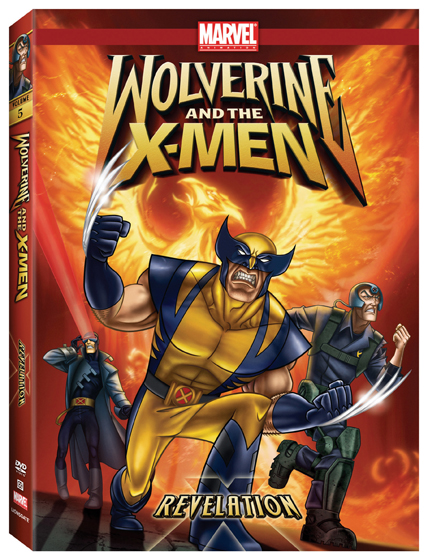 We’re nearing the end of the line with [[[Wolverine and the X-Men]]] as Lionsgate releases the penultimate volume of the six volume DVD set comprising the first, and now only, season of the animated series.

Volume five, [[[Revelation]]], is on sale Tuesday and contains five more episodes adapting themes and storylines from across the comic franchise’s storied history. As with the previous volumes, the latest of which we reviewed back in January, the animation is lean and adequate with stronger vocal casting than the 1990s incarnation.

One of the series’ strengths was in the consistent vision and voice of the writing team anchored by Nick Filippi, Greg Johnson, Craig Kyle, and Christopher Yost. As a result, sub-plots run from episode to episode smoothly and characters are consistent throughout.

We open with “Guardian Angel”, focusing on Warren Worthington’s simmering battle with his father over his destiny, leading to the loss of his wings and seduction by Mr. Sinister. You genuinely feel for Warren’s loss and see his fall from the skies as a tragedy, understanding why he agreed to become Archangel. (I admit to always having had a fondness for the red-and-white uniform he sported until this moment.)

Next up is “Breakdown” which gives us one of the more significant departures from the comics as Jean has been missing and Emma Frost has been helping locate her. Her efforts lead to a largely flashback episode showing us Scott Summers’ origins and his introduction first to Professor Xavier, then the initial [[[X-Men]]], and finally Jean. We also see the manifestation of the Phoenix Force which set up Jean’s current dilemma.

We then skip to one of the mutants’ many possible futures in the amusing “Rover” which involves Bishop and other mutants trying to deal with the rogue Sentinels that have overrun the world. Bishop wants to us their pet robot, Rover, to perform a suicide mission against the Master Mold but Marrow has grown fond of Rover and refuses to give it up. Kind of fun, but also annoying since it remains largely disconnected from the present day tale. The notion that Prof. X is in a 20 year coma and can still communicate with Wolverine and Cyclops is odd. This aspect of the series rings false and contrived, once again showing people just don’t know what to do with the powerful telepath.

Gambit is sent to Genosha to steal Magneto’s helmet in “Aces and Eights”, where the Cajun woos the innocent Lorna in order to obtain his goal. The personalities of Lorna Dane and Scarlet Witch are quite different than their comic book counterparts but they play off one another nicely and offer some of the best dialogue in the show. While largely predictable, it has some fun moments. Counterpointing the lighter main story, we end with Magneto and Senator Kelly being shown the disastrous future their actions are steering humanity towards.

This brings us to “Shades of Grey” the final episode, when Jean is finally located and Emma turns on the team. The action-packed episode also offers up the debuts of : Apocalypse, Sebastian Shaw, Selene, Donald Pierce, and Harry Leland, setting up the final episodes of the season.

Unlike the previous volume, this one shows the writers working a little more subtly with the enormous cast. [[[Wolverine]]] himself is actually merely a participant in these five stories. Overall, these are a mixed bag, more entertaining than not and certainly for diehard mutant fans.