Review: ‘Merlin Season One’ on DVD 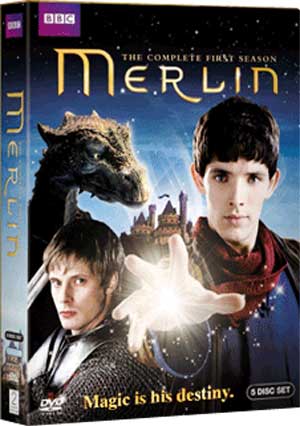 When the BBC series [[[Merlin]]] debuted two years ago, it was quickly described as a British version of [[[Smallville]]], that is a reimagining of the classic tale skewed towards teen characters for a more mass audience.

The difference, though, is that when Smallville debuted nine seasons ago, it was one of the sharpest written series on the air. The messages conveyed through dialogue, the foreshadowing, and rich experience of watching Clark Kent master his powers was slowly revealed.

Merlin, which aired in America on NBC last summer and returns this summer on SyFy, has had poor writing and lazy character development. The first season is released as a five disc DVD set on Tuesday and you can decide for yourself how palatable this look at the Arthurian legend is.

Rather than a Merlin who ages backward, this teen is a bit of a doofus, prone to gaffes but is a loyal and steadfast friend to the court. At a time when Uther Pendragon has forbidden the use of magic, Merlin comes to the court to train under Gaius, the King’s physician. As a result, every episode involves him using magic at great risk, and every episode has him learning some valuable lesson.

To be kind, the series has been very liberal in its interpretation of the characters with most being recognizable in name only. In addition to goofus Merlin, there’s gallant Arthur (Bradley James), the apple of Uther’s eye and being trained to succeed the king. He’s a callow youth only now beginning to understand the gravity of his destiny thanks to Merlin. Then there’s Guinevere (Angel Coulby), a peasant’s daughter and handmaiden to Morgana (Katie McGrath), a ward of the king and herself trying to comprehend the magic growing within her. Of course, Merlin likes Gwen, Gwen likes Arthur and Arthur likes himself. It’s complicated.

In addition to Gaius (Richard Wilson) being new to the story, there’s the chained dragon Kilgharrah, who seems to know Merlin’s destiny and provides counsel. Often, Merlin ignores it and makes the dragon, voiced by John Hurt, cry mournfully.

These thirteen episodes are largely repetitive as one or another gets into trouble, the others rally to his/her defense, Merlin does good but often pays for it in comical ways. There’s very little in the way of true danger or variety making the season a tedious one. Word is, the second season is far stronger, but they’re already lost me.

The cast, headed by Colin Morgan, is an attractive one and several guest stars could have enriched the show, starting with Michelle Ryan’s witch Nimueh. No doubt they’d all be more interesting to watch if they had good storylines or dialogue. Anthony Stewart Head is wasted as Uther, given a largely one-dimension bastard of a character to play. When his reasons for banning magic are revealed, it makes sense, but makes us sympathize with him no more.

All the tropes from [[[Excalibur]]] to [[[Mordred]]] are present, foreshadowing the legendary times ahead, all adapted in vaguely recognizable ways.

The episodes are accompanied by two making-of featurettes adding up to over an hour of information on the cast and the production. A 16 minute featurette also explores the episode focusing on the Black Knight in addition to a photo gallery, wallpapers, and a set of video diaries which are mildly amusing.