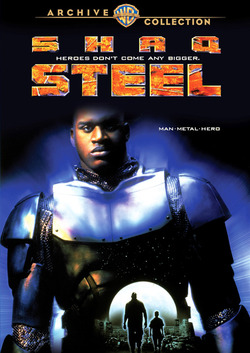 Less than five years after his introduction in comics, [[[Steel]]] made it to the feature film pantheon of super-heroes. At one point, Warner Bros. was intending to produce a film adaptation of the best-selling [[[Death of Superman]]] storyline and it was decided that a Steel spinoff movie made sense. When it became clear that major [[[Superman]]] buff Shaquille O’Neal was serious about an acting career and that the Death movie was not going to happen, Warners decided to go for a modestly budgeted film anyway.

The $16 million project was handed to science fiction television veteran Kenneth Johnson whose only previous feature experience was directing [[[Short Circuit 2]]]. They were betting that he would bring the same magic here as he did with the[[[ Incredible Hulk]]]. He wrote and directed a film that was lambasted upon its August opening, earning a meager $1,686,429.

Now, as a part of the Warner Archive series, Steel comes to DVD this Tuesday. You have to love the basketball superstar or the character to put up with this poorly conceived adaptation.

Here’s the official synopsis: When evil scientist Judd Nelson ([[[Jay and Silent Bob Strike Back]]], [[[The Breakfast Club]]]) begins selling top-secret weapons to LA’s street gangs, former military researcher Shaq joins forces with a brilliant electronics expert to build an invincible suit of armor. Layered in his magnetic metal sheath and armed with his own hi-tech weaponry, Shaq transforms into his mythic alter-ego, Steel. From a secret command center, Steel sets out on a high-powered silver motorcycle to confront Nelson and rid the city of crime.

As you can see, it has no bearing on the Steel spinoff comic book that at least had Steel taking on a company did that him wrong. Instead, you have Nelson as an unconvincing evil genius who lacks any sense of threat.

Shaq is physically fine as John Henry Irons but the man can’t act and once he donned the armor, couldn’t move with the grace we saw for over a decade on the basketball court. His armor looked fake and the hammer just didn’t have that menacing feel.

The best thing about the film was Annabeth Gish as Susan Sparks, a wheelchair bound ally who evokes thoughts of the comics’ Oracle. Her performance was the most convincing in the largely flawed film which was shot like a TV movie, not a big screen feature. You would have thought[[[ Quincy Jones]]], who co-produced the movie, would have insisted on a little more gravitas or at least made some connection between Steel and his namesake, the American folklore hero John Henry. Instead, they drag in Richard Roundtree to lend the movie some street cred (audiences could see him and think, “ooh, Shaq and Shaft, this could be good” then get disappointed).

As an Archive film, you get an adequate transfer and zero extras. If you are a DC super-hero completist, then this film’s for you. For people looking for action and adventure, look elsewhere.