New Doctor Who For You, Too 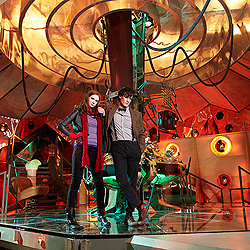 The eleventh doctor debuted on British teevee this weekend, in the 31st season of Doctor Who. It will be airing on BBC America on
the 17th, so I’m going to avoid any spoilers. Still, consider this something of a warning;  if you don’t wanna know diddley, go no further.

If you’re still with me, here’s what you will need to know:              Matt Smith and Karen Gillan will do just fine, thank you. Smith plays the
new doctor as a younger and brasher version of David Tennant’s doctor, which is only appropriate given Smith’s age. He wisely retains the 10th doctor’s joie de vive; he’s having a ton of fun. And Gillan plays the skeptical sense of wonder beautifully in what is this time a particularly demanding role. But the actors are not the most important aspects of doing Doctor Who correctly.

The most important aspects are the writing and the production. I never met a doctor I didn’t like, but the last two guys on the original series were hamstringed by uninspired scripts. No worries here: Steven Moffat is an excellent writer and as producer he truly gets it. His predecessor ran each show at breakneck speed; Moffat kicks it up a notch.

The season-opener presents a particular nightmare for the writer: he has to introduce a new lead character in a show that’s been around for 31 seasons. Origin shows, often called pilots, are a bitch to write because you’ve got to introduce everybody and set everything up while you’re telling a
compelling story. That’s a lot to squeeze into one episode; Moffat had the
additional problem of satisfying those fans of Tennant’s or, for that matter, any of the preceding doctors.

The fact that he pulled it off is a minor miracle. Matt Smith won’t be the only person having fun here.