Review: ‘On the Odd Hours’

On the Odd Hours (Louvre Collection) 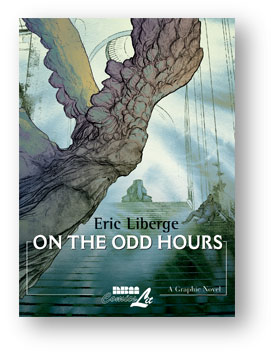 Art is in the eye of the beholder, we’ve been taught. But it’s also a matter of the soul so some works move people while others are bored silly by the same piece. Apparently, there’s far more to the paintings and sculptures than one might imagine if you buy into Eric Liberge’s graphic novel [[[On the Odd Hours]]].

The third in an imaginative series of graphic novels co-published by NBM with the Louvre Museum, this book tells of Bastien, a deaf mute who has had an internship arranged for him by his loving girlfriend. Instead, he winds up missing his appointment and being recruited by a deaf guard to join him on the nightly rounds.

The night guards are charged with looking after the souls of the artwork, sounding percussion instruments in order to let them free and roam a bit before returning to their usual positions for the daylight patrons. Bastien is being recruited because the guard is old and sick and the legacy must continue.

The premise is certainly an interesting one but Liberge fails to make Bastien an interesting character, robbing the entire story of its power. The plight of the deaf mute is a difficult one, but we’re told he’s been difficult from birth, refusing to train himself to operate in the world. We have no clue what his girlfriend sees in him or why we should care for someone with contempt for the rest of the world. Had we seen some redeeming feature, his frustration with the haring world would have worked a lot better.

His mentor, Fu Zhi, delights in slowly revealing the museum’s true self to Bastien but with his illness, one would have expected him to explain more and prepare Bastien for his new role. Instead, Fu dies and Bastien winds up being fired from his job.

The entire final section of the book is Bastien’s immature attempt to regain his work and to protect the Louvre’s treasures. By the end, I am left deeply dissatisfied with the story.

Liberge’s artwork is attractive and works in a muted palette, making everything, even the classic works, feel drained of life. He’s ill-served by the small format of the book, 6.5” x 9”, so everything feels cramped. His balloon and caption placement is also dreadful and could have used a helping hand from his editor for greater clarity.

Where he excels is in depicting how the deaf communicate and you gain a greater appreciation for their situation in a world built for oral and audio communication. A little less successful is how he shows the sonics freeing the souls of the artwork, especially as he frees most of them for the daylight climax.

Many will no doubt judge this as an artistic success for Liberge, who has graduated from fanzines to a fine career as a French graphic artist but for this patron, the work left much to be desired.