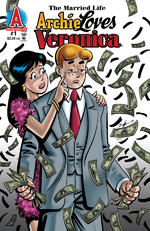 We all know that Marvel has their Marvel Universe and their Ultimate Universe, and we know that DC has 52 different universes all in
constant flux, but did you know that Archie Comics – yes, Archie Comics – started three more brand new universes in the past
several months?

That brings their total up to at least five; six if you count the one that DC has been renting for a while. There’s the ongoing America’s Typical Teen-Ager universe and there’s their new-look more up-to-date and somewhat more realistic universe. To this they have added a universe in which their 1950s characters such as Super Duck and Cosmo The Merry Martian
live – they crossed over into the mainstream universe this past winter – and now they’re adding a universe in which Archie married Betty and another in which Archie married Veronica. 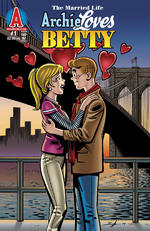 I don’t know if those last two will have legs, although Betty and Veronica certainly do. But right now they’re quite timely.

Over the many years, Archie Comics has shown a many attempts at very creative and sometimes even courageous projects, although most lasted only briefly. Given their newfound editorial prerogatives, can we expect Senator Reggie Mantle, Mister Lodge’s Ponzi Schemes and, ultimately, Archie’s Divorce Comics?… And, as we suggested in our own Munden’s Bar, maybe even Archie Marries Jughead?

Well, progress is one thing, and blasphemy is quite another.