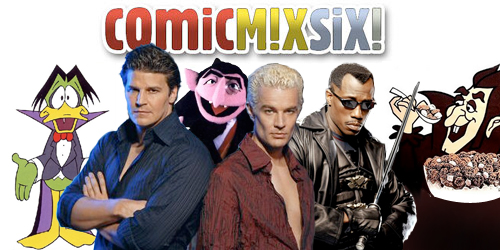 Vampires are everywhere these days. But long before we had Team Edward

and the litany of prissy emo vampires that sparkle in the G-D sun… we had real vampires. They were in popular books, TV Shows, comic books, movies made from popular books, adaptations of comic books turned into movies, and even a comic book series adapted from a popular TV show based on characters from a movie! You get the drift. And throughout all of these various sucktastic productions, the tent poles of vampirism always held true (You getting this, Eddy?). Vampires are generally more pale than the Irish, and hate the sun more then old Jews. And furthermore, they have a thirst for blood worse than the republicans. But we kid, Edward. It seems some popular Vampires (like yourself) don’t stick to traditions. Some don’t even suck blood to survive! Don’t believe us? We didn’t either, until we came up with this list:

Count Duckula – Spinning off from the popular Danger Mouse series created in the U.K., came a vampire with who’d rather toast with a tomato than nibble on a neck. In the series, Igor whilst incanting the resurrection spell of his deceased master, was accidentaly provided ketchup in place of the ceremonial blood. Thus Count Duckula was born! Far more concerned with fame, fortune, and feasting on fennel, fava beans and fresh fiddlehead ferns, Count Duckula was known more for his fondness of broccoli sandwiches than being a creature of the night. And hey, even if he decided to switch menus? Fat chance! The poor duck didn’t even have fangs.

Angel & Spike – Joss Whedon took his video store lump of coal, and coaxed it into a diamond of a TV series. He did so first by fleshing out Buffy to be more than just “Pert. Wholesome. Way Lethal”. Better than that though, he introduced a pair of tragic vamps. Smokey-eyed, bleach-blond Spike and always-afflicted sorrow-souled Angel were both introduced into the Buffy show but eventually outgrew their roles there and turned into breakout anti-heros with a new show, and multiple comics. And what of their diet de-jour? Well, Spike (in the fourth season of the series) was implanted with a chip rendering his bloody biting habit incapacitated. And Angel? Well, cursed with a soul, he’s the vampire forced to pay the world back for the sins he committed earlier in life. Sure both these babe-magnets had their anti-hero appeal, but in the end, Angel ended up solving mysteries with some chick with a thing for bones, and Spike was revealed to be a rather poor version of Brainiac.

Blade – We could get into the comic backstory here…  how the brainchild of Marv Wolfman and Gene Colan in the early 70’s was Eric Brooks. Brooks’ mother was ravaged by vampire Deacon Frost during his birth, thus granting him a swatch of vampiric powers. Of course, this rambles on, as most comic backstories do… But allow us to switch to the recent movie-marvel-verse version we’re all a bit more familiar with. Similar to his comic counterpart, Blade’s mother was attacked by a vampire prior to his birth, and due to it, was imbued with all the vampires powers, and none of their weaknesses; Save for the worst one around, the lust for human blood. But Wesley Snipe’s Blade is a tragic hero, choosing to exist off a concocted “formula” made by his mentor (Stick, aka the dude who opened for Johnny Cash back in the day…) rather than suck the blood from humans. The pros? Well, Blade looks super cool in his trench-coat as he lays waste to vampires ranging from the prissy Steven Dorff to the steroidal Triple H, all while having that “Gritty Hero with the Heart of Gold™” look abouts him. The cons? Well, three decent movies down, and Blade hasn’t really found his audience in the funny books just yet. Sucks, don’t it?

Count Von Count – Von! Two! Three! Ah-Ah-Ah! So sayeth the muppet master of the macabre. Ok, to be fair, the Count, of Sesame Street fame, is hardly gruesome. In fact, PBS stripped him of his mind control powers early after his debut, fearing kids wouldn’t take to the Count controlling the minds of minions who got in the way of his OCD. While it’s not exactly covered anywhere we know whether Count Von Count is a bloodsucker, if the powers that be won’t even let him use a hypnotic gaze, we’re safe to assume the bloodiest thing he drinks is a virgin bloody mary. How many does it take to allow him to start the day? Count? Von… two…three… four…. five! Five virgin bloody mary’s to make it through a taping of Sesame Street! Cue the lightning and the thunder kiddos.

Man-Bat– So Kirk Langstrom has a thing for bats. Don’t get us wrong, if we were an animal biologist who was suffering from slowly going deaf… we might do a little research in “borrowing” some traits from the majestic bat. And if we were unlucky enough to find that the serum we tested on ourselves DID grant us the super sonic hearing of our leather-winged friends… would we have taken it, knowing it came with a price? Seems the formula has some nasty side effects (and these days, what medicine doesn’t seem to come with a laundry list of them?). Taking In-Bat-erol may cause drowsiness, constipation, increased feelings of aggression, nausea transforming into a large half-man half-bat creature with superhuman strength and limited intelligence, and dry mouth. Oddly enough though, it doesn’t cause any need to suck the blood from unsuspecting victims. Please consult your physician if you think you might need In-Bat-erol.

Count Chocula – We’ve covered several major vamps, but we’d be remiss if we didn’t get to the number one pitchman with fangs. Count Chocula has been hocking his sugar coated wares to the children of America since 1971. The Count is quite the pop culture icon, being named dropped in everything from Futurama, the Office, to Seth Green’s Robot Chicken. And why? Well, this Vampire never needed to gnaw on a neck. When he’s got a bowl of chocolate flavored cereal with chocolate marshmallow bits (part of a complete breakfast you know….) why he’s as pleased as punch. And trust us, unlike the Trix Rabbit or Lucky, the Count is pretty pimp. You never see kids stealing his cereal, and he’s never had to make a new marshmallow to stay fresh. Suck on that.