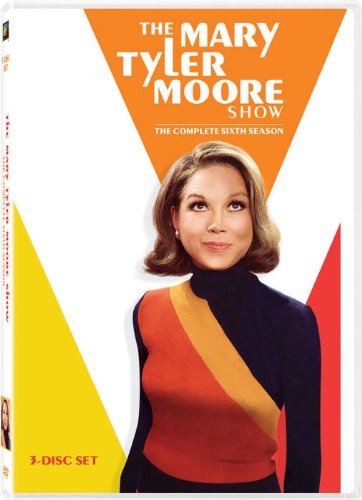 There were many groundbreaking television series as the 1970s arrived and most have been extensively written about because of their casting or long-term cultural impact. Norman Lear made the sitcoms more relevant by making his characters more like us and Larry Gelbart helped make sitcoms comment on issues of the day by adding an edge to the humor. But James L. Brooks, Allan Burns and company helped bring about a revolution in character-based comedy with [[[The Mary Tyler Moore Show]]].

Running from the 1970-71 season through the 1976-77 season, the series was built around Mary, a single, independent working girl. Initially, she was to be divorced but CBS wasn’t ready for that but she still broke ground. She had friends at home and at work, she dated, she gave terrible parties, but was exceptionally competent at her job, producing the evening news at WJM.

20th Century Fox Home Entertainment finally released the penultimate season this month and as with the best of comedy, it’s all in the timing. One of the show’s best writers, David Lloyd, died recently and just about every obituary singled out his episode “Chuckles Bites the Dust”, which is included in The Complete Sixth Season three-disc set so now we can see it once more.

By the sixth season, neighbor Rhoda Morgenstern (Valerie Harper) had been spun off into her show as was her landlady Phyllis (Cloris Leachman) so the series focused more on the newsroom. By now, the relationships and inter-personal dynamics between Mary, her boss Lou (Ed Asner), the news writer Murray (Gavin McLeod), and anchor Ted (Ted Knight) had been sharpened. The ensemble worked well together and their comic timing is strongly evident here, especially when they’re all together such as at Chuckles’ funeral. The supporting cast had been broadened allowing Betty White’s salacious Su Ann Nivens and Georgia Engels’ innocent Georgette to gain more screen time and each get showcased during the 24 episode season. It may have been MTM’s name in the title, but she graciously allowed everyone to take their turn.

The season opens and closes interestingly on characters not Mary. “Edie gets Married” is a terrific spotlight for Asner as he watches his ex remarry while “Ted and the Kid” shows how Ted and Georgette struggle to conceive only to wind up adopting (spoiling the episode was the pat pregnancy at the end). In between, we see Mary date and fall in love, only to have her heart snapped in two. She meets new neighbors, recurring characters played by Mary Kay Place and Penny Marshall (just as she gained fame as Laverne). Place, by the way, also wrote for the series so her contributions were strongly felt. 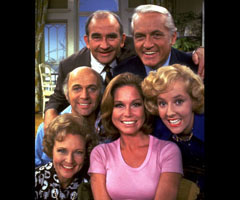 Its fun seeing people before they were huge stars such as John Ritter
playing the priest at Ted and Georgette’s wedding or McKenzie Phillips
as a truant spending time with Big Sister Mary. But the show works best
when we see the regulars yearn for a raise or promotion, struggle with
each other’s foibles and be there for one another when the going gets
rough. There’s a reason the series consistently won the Emmy as the
Outstanding Comedy among other accolades. This season it was not only
the best comedy, but Lloyd took home the Emmy for the Chuckles episode
while Moore, White, and Knight took acting honors.

The 1970s was a bright, colorful era and the fashions, hairstyles and sets are awash in bright, bold colors, preserving an idealized look at the decade. Be thankful we’re past most of those trends.

Because the humor comes from character and situation, you still laugh
out loud at some of the lines. The humor and situations may seem dated
but taken in the context of the times, the show actually tread on fresh
ground. Sitting with this series once more was warm and nostalgic but
for those wishing to see what the fuss was all about, this is a great
set for you.