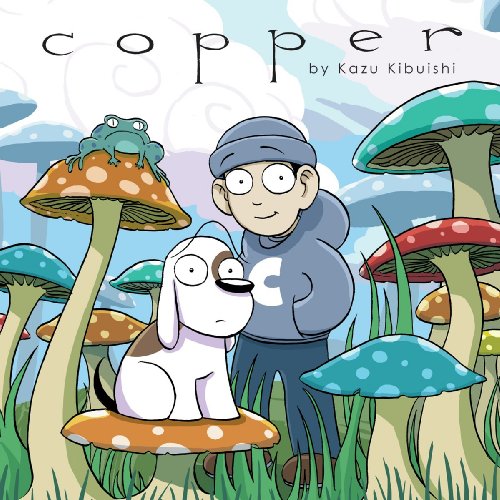 It’s often illuminating to look at a creator’s earlier works to see how they inspire and influence the later, better known works. Such is the case with Kazu Kibuishi’s Copper, now in a single volume collection from Scholastic. This webcomic, launched in 2002, was the first serious work the artist produced on a sustained basis and in his introduction; he talks about how this helped put him on a career path.

Copper is a young boy, accompanied by his dog Fred who is his best friend and constant companion. The classic duo, unlike [[[Red & Rover]]], go on fantastical adventures that in reading them reminded me of [[[Calvin & Hobbes]]] mixed with [[[Little Nemo’s]]] inventive page design. I was pleased to see that Kibuishi cites both in a recent Newsarama interview. There are few recurring characters beyond these two, other than the girl in the bubble, who appears as Cooper’s unreachable object of desire (think Little Red-haired Girl).

The artist began producing the feature as a large format comic strip with numerous panels and designs which The New York Times criticized as forcing the reader to scroll up and down to follow each strip. The 9”x 9” book solves that problem and collects every strip and story. He worked on the feature sporadically as his career began to take off and he began his [[[Amulet]]] series (which we reviewed here) and edited the [[[Flight]]] anthologies to showcase his friends’ work and where longer Copper stories ran.

The strip has been largely placed on hiatus while Kibuishi focused on the Amulet series and other projects. Reading this book, though, shows his growing sense of pacing and storytelling, without losing the sense of whimsy. Often the strips feature one or the complaining about the journey until the goal is reached and the real fun begins. The longer stories, including the 18-page “[[[Maiden Voyage]]]” show a wonderful sense of design and detail, along with a strong command of composition and color.

Copper is all about warmth and friendship, taking the universal theme of a boy and his dog and unleashing them into a borderless world of imagination. Taken as a whole, these are entertaining stories that demonstrate that if you apply yourself, and create from the heart, magic can happen.

The book concludes with a detailed feature on how Kibuishi creates a Copper strip which is a marvelous How To for would-be real world Coppers just now discovering comics.