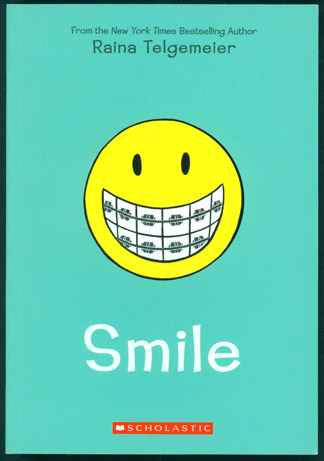 The adage says that you should write what you know and Raina Telgemeier knows more than a little about the awkwardness of adolescence, compounded by a dental problem. While in sixth grade, Raina fell and knocked out her two front teeth which meant surgery, braces, appliances, and feeling utterly weird while maneuvering through the ninth circle of hell that is middle school followed by the eighth circle, high school.

She channeled those feelings and experiences into [[[Smile]]], a charming memoir coming out now from Scholastic’s Graphix imprint. The San Francisco-native bravely shared her fears and frustrations in this lively and heartfelt story that is perfectly aimed at 9-13 year old readers who just may be having image issues of their own.

Telgemeier is no stranger to the artform, having justly earned a following with her graphic stories featuring the enduring [[[Baby-sitters Club]]]. With her husband Dave Roman, she also cowrote [[[X-Men: Misfits]]], a Manga-style story from DelRey. This is a woman who knows and understands the form and uses it with authority.

What’s interesting in this story is that Raina was not comforted when others turned up with braces, something that was all too common when my kids went through these years. The story uses her dental issues as the spine but you can see that she is also somewhat withdrawn, haunted by the harsh teasing of her social circle, all of whom appear clueless to her personal concerns. On more than one occasion, she is the butt of jokes and pranks and she endures them stoically, with no one but her supportive parents noticing how brave she has been throughout all this.

The dental and social issues receive a rude jolt of larger problems when Raina experiences the 1989 earthquake that shattered portions of the city and even postponed the World Series. It really isn’t until she’s in high school that she takes the bold steps necessary to find some measure of happiness.

She has younger siblings at home who find her annoying plus her somewhat cruel friends, but Raina also shares the heartache she felt for one student, something every reader will no doubt identify with. The 214 pages are broken into chapters that cover her school years in a breezy way, keeping the focus on her dental treatment and evolving relationship with friends. Other issues such as academics are merely window-dressing, adding context and flavor but not cluttering the story.

Her drawing is a delight, the storytelling straightforward, and nothing is left ambiguous. She’s frank and honest, using this story as an emotional catharsis of sorts, while letting her readers know that it’s okay to be shy or getting medical work done is just another part of growing up.