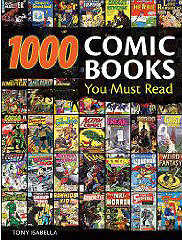 I want to publicly thank Tony Isabella for taking on a task that is as courageous as it is, well, thankless. It’s hard to imagine a more difficult and a more controversial chore than recommending only 1000 comic
books you must read.

This shows you how clever Tony is. First of all, he recruited over 130 people to make suggestions, including me as well as a good chunk of the state of Ohio – past and present (Harlan Ellison and Maggie Thompson are and will always be honorary Ohioans). Second, instead of arranging them numerically, an act that would guarantee his assassination at the 2010 Mid-Ohio Con (although this would make for a good panel), he arranged everything by decade. Brilliant.

This book is, above and beyond everything else, great fun.
There are hundreds of books you’d expect, and even more that you might not. Of those, the ones you’ve read will make you go “oh, sure, of course.” Those you haven’t read – probably the awesome Jingle Jangle Comics, or Dick Briefer’s Frankenstein – you should. Don’t worry: the way stuff’s being reprinted, it’s just a matter of time.

Each choice is covered by the appropriate publishing and talent credits as well as a nice clean reproduction of the cover, along with Tony’s accompanying paragraph explaining what and why. To his overwhelming credit, Tony does not emphasize superheroes and heroic fantasy – Archie, Harvey, and Charlton get their due, and the various genres such as humor, children’s, and romance are well-covered.

The tome is well-designed and not the least bit pompous.
When Tony told me he had taking on this project, he headed me off by saying he was, obviously, crazy. Well, having poured over 1,000 Comic Books You Must Read, I’ve got to say “not so much, Tony. Maybe just a little bit.”

You’ll love it. It’ll make an excellent holiday present.
For any holiday. Go buy it