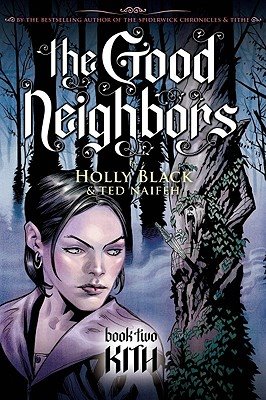 Trilogies can be tricky things to pull off successfully. Quite often, a single event is a surprise success and suddenly gets expanded into a trilogy. Why? Because it feels like an expanded version of the three-act structure that has a stranglehold on popular storytelling these days. Some trilogies should have remained a single event ([[[The Matrix]]]) while others have proven more successful (the original [[[Star Wars]]] trilogy).

Holly Black knows how to structure a trilogy. With artist Ted Naifeh, she returns to her original graphic novel series, [[[The Good Neighbors]]], and shows how to properly structure a three-part tale. In the course of 115 pages, we rejoin our characters but learn much more about their interrelationships and the world of magic that now threatens the modern world. The story continues, grows, and leaves you anxiously awaiting the final chapter.

Rue Silver learned in the first book that she was not really an ordinary teen but the product of a truly mixed marriage between her human father and her faerie mother. In book one, which we adored, we discovered that her mother was not really dead, but had returned to the faerie realm at the behest of Rue’s grandfather. Grandpa wants the town for himself and has been setting things in motion so after a key ceremony; the university town would be walled off from mortals and become a home to the faerie folk.

The stakes have grown in this book and a major sequence comes when Rue agrees to spend the night with her mother and grandfather in their realm. She learns of her heritage and discovers how similar and dissimilar the faerie are from humans. Her mother is far from warm, but wants Rue to stay with her, abandoning Thaddeus. Dad, meanwhile, learns his wife is not dead and breaks the news to the woman he had begun a romance with; a woman who has long loved Thaddeus and was Rue’s one true adult friend.

Rue’s circle of friends has come to accept the wild magic and existence of faeries, coming to Rue’s support. Throughout this chapter, though, new strains are placed on the bonds of friendship and some may not be emotionally strong enough to help when they’re needed the most.

Black’s writing is solid with the story being exceptionally well-paced. The characters have distinctive voices and personalities, which helps a lot. Naifeh’s art mixes fantasy and Goth in nice gray tones, helping differentiate the two worlds. On occasion some of the characters are hard to distinguish from one another but overall, his art goes a long way to enhance the story and keep readers turning the pages.

This all wraps up in the final volume, due next year, and one can hope it ends as strongly as it has started.