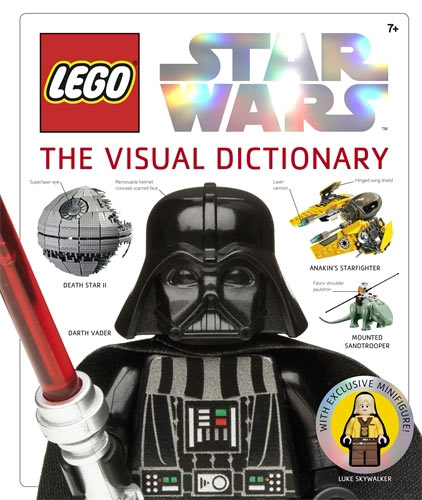 It used to be that Lego would never feature licensed characters. Instead, you could construct moon bases or pirate ships and make up your own characters to tell tales plucked straight from your imagination. Then came the first license, [[[Star Wars]]], which proved so successful that there is now an entire line of licensed Lego toys which in turn have spawned video games and related merchandise.

Now, DK Publishing this week provides readers [[[Lego Star Wars: The Visual Dictionary]]] which breaks George Lucas’ universe into sections: the Movie Saga, The Clone Wars, Specialist Sets, and Beyond the Brick. A handy timeline upfront shows you the explosive growth of the line with every set properly displayed and identified for completists.

Each section properly displays each figure or vehicle with a handy guide to the number of pieces, their set number and which film the construct relates to. Along the way, the capsule descriptions provide information not only about the figure or vehicle but about their construction and history. You learn some interesting facts and I discovered to my surprise and delight that set 7163 features a Jedi Bob (must find!).

This is a treasure trove of information for the diehard Lego collector but written for those 7 years old and up, it also is engaging and entertaining with information about the characters and their adventures.

The book, as is typical of DK’s output, is a visual treat and the bottom corners feature, respectively, storm troopers and Luke Skywalker so flipping through the pages you get a sense of animation.

Not being a kid anymore, I found the Beyond the Brick section the most fascinating to see the level of detail that went into their construction as Jens Kronvold Frederiksen, Design Manager, has a nice interview about the entire Star Wars line for Lego.  There’s even a final spread about the Lego Star Wars merchandising which is a growing subset of the overall Star Wars phenomenon.

As with any Lego line, there’s something special here. The book comes complete with an exclusive Luke Skywalker minifigure which begs the question if the book is ruined by taking out the toy to play with his compatriots.