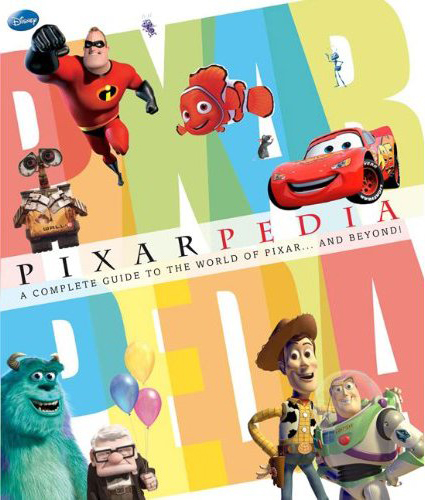 I doubt there has been a studio to start out with as long a streak of consecutive hits as Pixar. Not only have they succeeded beyond anyone’s wildest expectations, but they have helped rewrite the rules for family entertainment and created an armload of pop culture characters that are likely to endure for decades to come.  The secret, it seems, has been to take iconic themes and figures and distill them down to their essence then tell engaging stories that never lose sight of character.

You are reminded of those relatively simple and obvious lessons while reading DK Publishing’s [[[Pixarpedia]]], which was released some weeks back.   Written with their core audience in mind, it’s geared for 9-12 year old readers and is a treasure trove of information about every feature and short film they have produced along with details on each character seen in the films.

The book is divided into thirds with the bookend sections about the studio. You can trace their progress from a small company owned by George Lucas to its sale to Steve Jobs and its explosive growth. The final third, Behind the Scenes, provides cast and crew credits and assorted trivia tidbits about each film along with sidebars spotlighting members of the company with career capsules.  It’s amazing how many shout outs there are for beloved movies and people) especially Mickey Mouse) hidden in each film. You are shown many, but certainly not all, of them in this section.

The largest third is the movie by movie section that provides information about the major and minor characters. Unlike too many DK books, the visual design is clean and colorful, easy to read and chock full of detail. Sprinkled throughout are “Did you Know?” bullets with factual information that supplements each film. You get a plot summary, character descriptions, lavish looks at the sets and lots of fun reading.

Paging through the oversized book is a treat and overall, you come away with a greater knowledge about the characters than you might have imagined possible. At the end of this portion, there are pages dedicated to the themes that carry through the films and its their dedication to these simple dictates, like “You’ve got a Friend in Me”, that places their output head and shoulders above the competition.