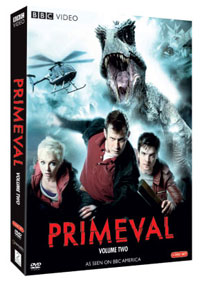 The world of Primeval

is a duplicitous one, with schemes within schemes, most of which take far too long to play out. When the BBC series was renewed for a third season, they were given a ten episode order and they decided to change things up while introducing new threats, leaving things more muddled than necessary.

Airing this spring in England and here on Sci-Fi Channel, the series garnered good reviews and very solid ratings. However, ITC, facing a cash crunch, canceled the series, paving the way for a big screen adaptation currently being mounted by Warner Bros. For fans, though, they can relive the exploits with [[[Primeval: Volume Two]]], released Tuesday by BBC Video.

The series, about a team of specialists protecting the citizens of the 21st century from prehistoric beasties that have come though spatial anomalies, had two shorter but stronger seasons. Between seasons one and two, an event in the past had dramatic repercussions, removing Claudia Brown from reality. Season two opened with Jenny Lewis, an exact replica of Claudia, newly hired to handle the press and public whenever the creatures got spotted. Given that Claudia had a romance developing with Nick Cutter, this threw the team leader for a loop. While he had feelings for her, she was slow to recognize the same emotions for him. As that developed, Cutter’s ex-wife Helen continued her mysterious comings and goings with some mysterious purpose and as season two ended, she wound up shooting and killing the team’s action ace, Stephen Hart.

Season three continued to stir things up as Cutter wound up being killed and project director James Lester assigned the leadership to the ill-equipped Jenny. After only a handful of assignments, she withdrew from the team and the series. All of a sudden, Jenny’s old pal Danny Quinn talked his way not only on to the team but was named its leader. The team was also rounded out by Egyptologist Sarah Page and Captain Becker, a military escort.

In addition to Helen’s ongoing threat, a new menace rose in the form of bureaucratic rival Christine Johnson, who wanted access to some artifact that actually came from the future but wound up in the team’s hands.

Over the course of the ten episodes, Helen and Christine played cat and mouse with the team – and the viewers – while each week the team had to keep London safe from creatures great and small, all the while coping with the grief of first losing Hart, then Cutter then Lewis. Personal story arcs, such as the slowly simmering romance between Abby and Connor were tertiary concerns although they were the bits that made us care most about the characters.

In fact, while the creatures were visually fun thanks to improved CGI, too often the chase sequences and fights were too long, robbing the characters of a chance to evolve. Bits between players, such as Connor’s temporary lodging with Lester, were given short shrift in favor of chase scenes that wound up being boring and prolonged.  Becker is never given any depth (or a first name) while Christine wound up being a cardboard opponent.

The writers get credit for changing things up, such as the time a Knight in shining armor chased a creature through a portal and thought modern day London was Hell. On the other hand, Abby’s brother proved an annoying distraction who was better off dispatched by a beast rather than allowed to live another day.

In the end, we learn that Helen has been trying to prevent the hellish future she witnessed from coming to pass and do so in a dramatic fashion. The climax in episode ten actually left the entire team in a predicament demanding resolution which hopefully will come via special, movie or even a novel. As it is, the ten episodes, while entertaining, truly resolve very little, which is a disappointment.

The second volume three-disc set has some episode commentary that sheds a little light on the series overall. The two extras are not nearly enough to provide context for the changes made to the series. One is a look back at Nick Cutter’s journey form first episode to last, which is nice, and then there’s a documentary on the guy who won a design a creature contest, showing how his amazing drawing got used in Episode 8.

There’s a lot to like about Primeval, its setting and its characters but it also suffered from some inconsistency that should have been ironed out well before the third season. With luck, they will be granted another opportunity to come back and enthrall us.