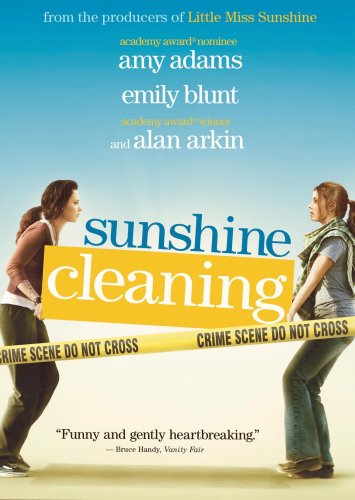 Most times, we read our comics and watch our movies and television programs and come in at the beginning or during an act of gruesome violence. Often, we then see the crime scene investigators do their thing and then leave. But what becomes of the crime scene afterwards?

Answering that question is the moving Sunshine Cleaning

, an independent film starring Amy Adams and Emily Blunt. The well-received film comes out on DVD this Tuesday from Anchor Bay Entertainment.

Adams plays Rose Lorkowski, a single parent stuck in a dead end job, trying to raise her young son. Raised by her failed salesman father (Alan Arkin), it fell to Rose to raise her younger sister Norah. Rose was once on top of the world, captain of the cheerleading team, but there she is, a decade-plus later and she’s still sleeping with the quarterback (Steve Zahn), despite his being married to someone else. She aspires to more, maybe real estate, but life keeps dragging her down.

The quarterback turned police detective suggests try her hand at the lucrative crime scene clean up business.  Rose convinces the hapless Norah to join her in this new venture and [[[Sunshine Cleaning]]] is born. We watch them figure out what the business is all about, stumbling on their own, until they meet up with Winston (Clifton Collins, Jr.), proprietor of a cleaning supply company who provides advice.

For a 91 minute film, there are many themes touched on in Megan Holley’s debut script. Love and loss, taking responsibility, struggling to raise a child and sister and father, missing a dead mother and more. Everything is intertwined as the story progresses but it’s not all neatly tied up by the end. Life’s a messy business, the tag line tells us, and director Christine Jeffs does a nice job showing us exactly that. While Rose is serious and trying to do right by her family, she does so at the cost of her own freedom and happiness. Norah is directionless and gains her first taste of adulthood by working with Rose and by trying to befriend the daughter of a victim. Meantime, we’re left uncertain as to what is wrong with young Oscar (Jason Spevack) – is it ADD, a closet genius or something else. He’s also just trying to get by while being looked after by his grandfather and aunt.

The performances are somber and dead on. Adams, normally gorgeous and perky, allows herself to look dowdy and sad while Blunt, more of a chameleon actress, fully inhabits Norah. Arkin plays Arkin, a man past his prime, terrified of disappointing his family yet doing it again and again as his schemes to make a buck fail. The core cast is ably supported, notably by Collins in an understated part.

The movie comes in both widescreen and full screen, which is a somewhat unnecessary option. The sole unique extra is a wonderful 11 minute featurette interviewing two older women who really do this sort of work. They show where the film was dead on and where it took some liberties, plus showed how they did some of their work.