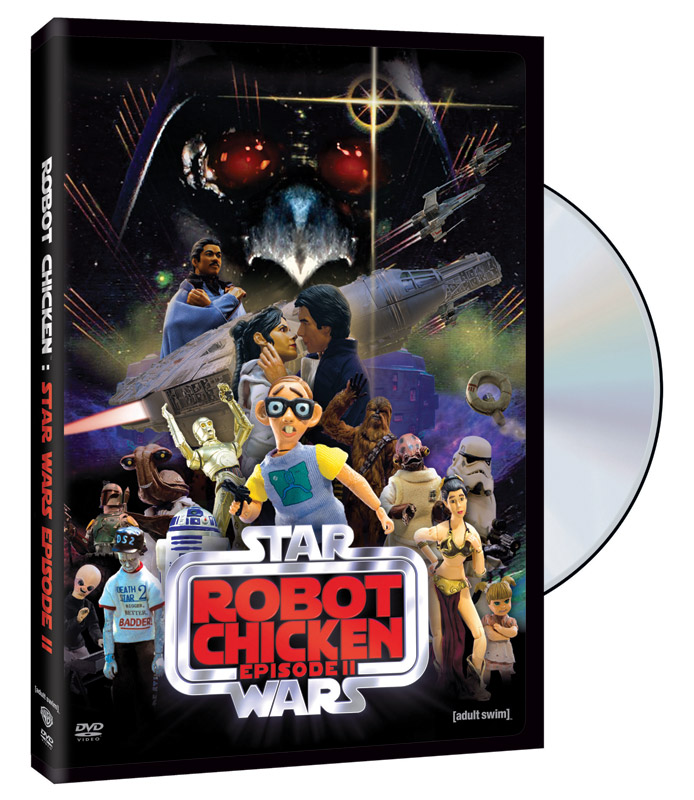 has been satirizing popular culture with tremendous success since its debut on Cartoon Network’s [adult swim] in 2005. The brainchild of executive producers Seth Green and Matthew Senreich, the show has skewered all manner of films, television series, and celebrities.

Their most successful outing was the [[[Star Wars]]] Special, first aired in June 2007. The wild success in terms of ratings, critical commentary, and DVD sales meant a sequel was inevitable. The [[[Robot Chicken: Star Wars Episode II]]] special aired last November and was recently released on DVD by Warner Home Video. It was also nominated for a 2009 Primetime Emmy Award for Outstanding Animated Program (for Programming Less Than One Hour).

Amazingly, the 22-minute special has been expanded and extended so the disc is filled with 93 minutes of material. You have the original broadcast version, plus the 38 minute extended versions and then 33 minutes of extras.  That’s pretty impressive.

The special is also pretty damned funny. The short sketches plays with most of the six films, mainly [[[A New Hope]]] although the AT-AT race is inspired from [[[The Empire Strikes Back]]]. All you favorite characters are represented with original performers Carrie Fisher, Billy Dee Williams and Ahmed Best reprising their film roles. As a result, it sounds and feels right.

Highlights include a Stormtrooper bringing his daughter to work and involving her in the fight with the rebels at the opening of the fourth film. The Geico commercials having people interpret real life incidents gets a once over with Jar-Jar Binks, in his best role yet, trying to help a woman. Throughout the special, there are great sight gags and one-liners. Obviously, not every joke or sketch is brilliant, but they never fail to amuse.

Clearly, the extended version gives you more to enjoy and plays better than the truncated broadcast edition. The tons of extras show you how the stories were conceived, from Green acting out a sketch for the animators, to a look at the production designs and set construction. A feature on the stop-motion process shows how much time goes into shooting these figures and gives you new appreciation for the art form.

A short shows the cast and crew trekking to Skywalker Ranch, now in the Presidio, to screen the finished show for the staff, including George Lucas, who at least gets the joke. Another short features the 501st Legion presenting awards to Green and Senreich.

Finally, there’s a ton of commentary, as amusing as the shorts themselves, from a ton of folk including Best, Williams, and unexpected folk such as Frank Oz.