Review: ‘Tom and Jerry: The Chuck Jones Collection’ on DVD 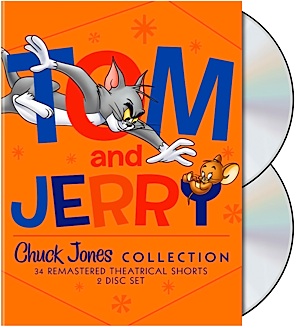 I have to laugh when I watch old [[[Tom and Jerry]]] cartoons. First, of course, because they’re funny. The original series of 114 theatrical cartoons by William Hanna and Joseph Barbera for Metro-Goldwyn-Mayer’s Hollywood cartoon studio were produced between 1940 and 1957, seven of them winning the Academy Award for Best Short Subject (Cartoons)…a tie for most awards, one should note for the animation snobs out there, with Walt Disney’s [[[Silly Symphonies]]] animated series. A series of perfectly dreadful and too-often released cartoons followed, produced in Eastern Europe (cheap labor, I would imagine, and worth what they paid for it), produced by Gene Deitch at Rembrandt Films in 1960 before, thank the animation heavens, there came Chuck Jones in 1963.

Which brings us to Tom and Jerry: The Chuck Jones Collection

, hitting stores on Tuesday. Jones was one of the handful of master animators to influence the entire look and feel of the Warner Bros. animated line with his Bugs Bunny, Road Runner, Tweety and Sylvester and countless other cartoons. But after 30 years, the studio closed its animation section and Jones set up his own shop, Sib Tower 12 Productions, with partner Les Goldman. MGM came knocking, and the 34 madcap adventures included in this collection was the result.

The second reason I find to laugh at these, or any classic animated shorts is because of how the reality of these characters clashes with the perception that has grown up around them since the 1950s when they began appearing as Saturday morning children’s programming. These cartoons were not created, originally, as children’s fare. They were, instead, part of a program of entertainment shown to adult movie audiences in a day and age when theaters routinely ran double features and the bill changed twice a week. Before, between and after the movies, however, came a variety of subjects: a newsreel, a short feature (usually humorous), a cartoon, and coming attractions, at the minimum. Look at a World War II era Bugs Bunny cartoon; that was not kid’s stuff!

Because as I watch these cartoons—and they are a lot of fun, have no doubt of that—I’m struck at how mercilessly violent they are. Heavy objects routinely fall and crush their victims (Tom), explosives blow in hand or in the victim’s (Tom’s) mouth, an axe used to chop open a mouse hole chops a victim’s (Tom’s) tail like a chef chops a carrot. The network censors chopped a lot of that material out of the cartoons when they went to TV in the 1960s, and, by the 1980s, the original essence of these little seven minute masterpieces was corrupted beyond redemption, to the point that as the writer of the Tom and Jerry syndicated newspaper strip for Editor’s Syndicate around 1990, I was told Tom could chase Jerry, but if he caught him, he could do him no harm. No hitting, no smashing, no slamming, certainly no chopping of tails. These guys were pals they just chased one another for fun.

Bugs Bunny has suffered a similar fate in the modern world: A friend working on a Bugs Bunny promotional comic book project was told by WB to change a gag because “Bugs would never produce a mallet out of nowhere and whack someone like that!”

But thanks to home video and DVD and the demand of the marketplace for original and uncut material, the truth is coming out. Tom and Jerry is funny and it’s funny because it’s violent. Take away the psychedelic randomness and well-constructed but mean-spirited violence of a situation like Tom and Jerry or the Road Runner and Wiley E. Coyote and all you’re left with is the existential angst of the eternal loser pursuing that well-known definition of insanity: doing the same thing over and over again in expectation of a different result.

[[[Tom and Jerry: The Chuck Jones Collection]]] is a textbook for such insane
repetitious behavior. The cartoons all follow the familiar pattern: Tom
is chasing Jerry, very clearly wanting to eat him; Tom, being a
domestic shorthair, often attempts to devour the mouse at table, with a
proper place setting, complete with silverware and such condiments as
salt, pepper and catsup. Tom gets his ass kicked repeatedly (Jerry
might take a few lumps in the first few minutes, but he’ll quickly get
pissed and turn the tables) yet does not stop coming for the mouse
until his inevitable and ironic comeuppance at the end of the cartoon.
It doesn’t matter, as in “Pent-House Mouse,” the first Jones effort,
that Jerry started it by dropping a metal lunchpail on Tom’s head from
the top of a construction site. It’s Tom that pays the price. Again, in
“The Cat Above the Mouse Below,” Tom is an opera singer taking the
stage for a performance in a legitimate opera house before a paying
audience…but that performance happens to disturb the sleep of Tom,
who has taken up residence under the stage. He’s a squatter disturbed
by a legitimate use of the property he’s squatting on, yet it’s Tom who
winds up with his tail in a sling. To heighten the cruelty, Tom is
always allowed just an instant, that single moment of believing he has,
this time, won…before the rug is both metaphorically and really
pulled out from under his paws. Existential scream, anyone?

But
cartoon cat and mouse chases aren’t about fairness; they’re about
frenetic energy and things going splat. And, under the direction of
Chuck Jones, frenetic splatting abounds, as does surrealism and a
healthy dose of utter absurdity. And done on a budget, but with
infinite imagination. While Hanna and Barbera had distilled animation
for TV down to the lowest common denominator of “limited animation” in
Huckleberry Hound, Quickdraw McGraw and [[[Yogi Bear]]], Sib Tower 12
Productions was still doing full-animation, just not as lushly as in
the old days. Jones designs the more elaborate stunts and gags that
would require expensive animation to occur off-camera, substituting
sound effects and react shots for comedic effect. It works, of course,
because on a Jones cartoon, the money went into drawing and animating
the acting of his cast.

Tom, the real victim in these
cartoons, is given the most expression, often as he takes his beating
with surprising aplomb and superbly animated action, but on a subtle
level that you don’t think about while you’re watching. It’s only
later, as in a bit in “Jerry Go Round” in which Tom is on a ladder
that’s been pounded into the ground by an angry elephant; Tom climbs up
the ladder and out of the hole in a daze, continuing to climb even
after he’s run out of rungs. His little stumble when he finally
realizes what’s happened is so real, so true, you have to stop and
remember this is an animated cat. Early in “A-Tom-inable Snowman,” a
bomb explodes in Tom’s mouth, shooting his teeth (the full set) across
the room. Without changing his perfect, world-weary expression, the
suffering cat blows out a puff of smoke and calmly wipes his lips.
Later, in the same short, Tom is skidding uncontrollably across the ice
towards a hole. When he realizes the inevitable is coming, he just
looks at the viewer with that poor bastard look Jones had perfected for
his losers and shrugs a “What? Me worry?” shrug before plunging into
the water and being entombed in solid ice.

Tom can’t even win
when he wins. In “[[[Snowbody Loves Me]]],” Tom finally catches Jerry but in
exasperation, tosses him out into the blizzard rather than eat him. The
cat’s conscience gets the better of him and he saves Jerry from
hypothermia, bringing him back inside and feeding him Schnapps to
revive him. The cartoon ends with Jerry dressed up like a tiny
Burgomeister and dancing while Tom played traditional Bavarian music. I
don’t quite know what was going on in that one.

But music, of
course, plays an important role in the Chuck Jones Tom and Jerry
cartoons. Other than a few grunts and groans, these shorts were played
largely in pantomime, but the director who gave us the classic Bugs
Bunny “[[[What’s Opera, Doc]]]?” creating the proper mood with music is not
an issue.

If the cartoons in Tom and Jerry: The Chuck Jones
Collection remind you of the WB oeuvre, it’s because Jones pretty much
defined that look with his handling of the Warners flagship characters.
The same is true of the Chuck Jones animated version of Dr. Seuss’s
“[[[The Grinch Who Stole Christmas]]].” When most of us think of the Grinch,
we don’t think of Seuss’ rendition but of Jones’ animated
interpretation of it. True, his Tom and Jerry shorts do not hold a
candle to his best Warner Bros work, but even these lesser efforts are
better than the best of most other animators.

Chuck Jones
himself is well spotlighted in this two-disk set, first in “Tom and
Jerry…and Chuck,” a documentary narrated by voice artist June (Rocket
J. Squirrel) Foray chronicling Jones’ history with this “violent twist
if the eternal chase,” as well as a second documentary, “Chuck Jones:
Memories of a Childhood,” told through Jones’ own words (and he is as
good a storyteller in person as he is on the animation cel) backed up
by old photographs and film clips, along with over-the-shoulder shots
of Jones sketching the people and events he’s describing as little
snippets of delightful pencil-test animation of his stories.

Tom and Jerry not violent?