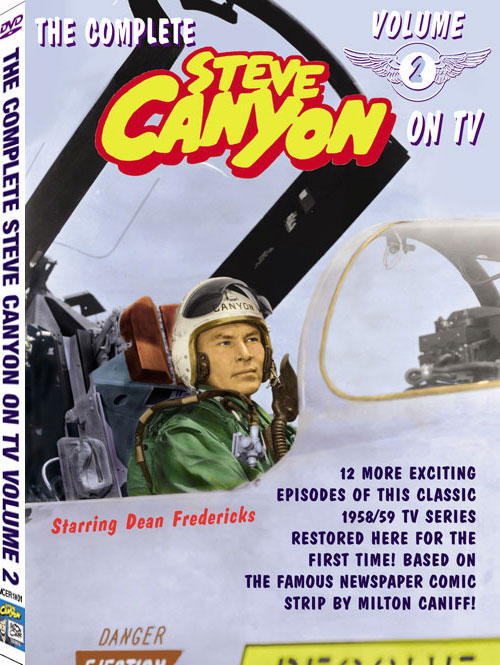 The second volume of [[[The Complete Steve Canyon on TV]]] is just out and there are 12 more episodes from the one season series based on Milton Caniff’s wonderful comic strip.  As with volume one, no one other than Canyon appears from the strip and there’s precious little in recurring characters on the show.

This is a perfect example of 1950s television when the star was role model perfect and merely there to propel stories along. We learn nothing about Canyon, who has a wide network of friends and acquaintances from coast to coast. While based at Big Thunder, his adventures take him far and wide as he helps those in need or is caught up in problems that just happen to occur.

Clearly, the highlight of the two-disc set is the Christmas episode written by Ray Bradbury. On the one hand, it’s a typical holiday television story and on the other, it has a spiritual and emotional depth missing from so many seasonal tales. Not only that, unlike so many Canyon episodes it tugs at your emotions as Canyon ferries a group of Hungarian refugee children to a German base where local families will host them for the holiday. Canyon has to figure out why one girl finds no joy in the holiday and his solution is a nice, universal one.

On the other hand, some of the histrionics in other episodes stagger those of us raised on more nuanced acting. “[[[The Search]]]” has a hammy Jeanette Nolan as a panicked wife begging Canyon and the Air Force to locate her missing, well-connected husband. She chews the scenery, wailing beyond human reason for most of the 30 minutes.

The remaining stories range from illness overseas to a damaged landing wheel. The final episode, “[[[Strike Force]]]” starts off well with a tension missing from most of the other stories but then becomes tedious as Canyon commands a three-part strike team on a Cold War exercise over the Atlantic. We’re told how difficult the coordination will be and how tough it is on the pilots for flying 10-12 hours each to be precisely in position on time but everything goes perfectly with no twists, surprises or reason to worry. The episode did make great use of archival footage.

Another pleasure in watching these shows is to see guest stars we know from their later works. Leonard Nimoy has a fairly thankless role in one while Gavin McLeod and Jack Weston get the have some fun with more substantive roles in a different story. The final episode, “Strike Force” has a blink-and-you-miss appearance by [[[Mary Tyler Moore]]].

The episodes are crisply restored, most complete with commercials from the era with audio commentary from some o the guest performers and historians. This is definitely worth a look for those who love the character or old-time television.