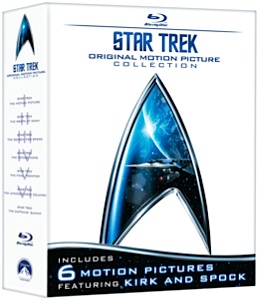 It is most logical for Paramount Home Video to be flooding the shelves with product capitalizing on the release of [[[Star Trek]]]. We’ve been treated to the various Best Of sets, the first season of the original series and now the first six feature films all making their Blu-ray debut

. The first question is always, why should I upgrade from DVD to Blu-ray? In the case of the television, there was little doubt. Here, with the films, the answer is less clear cut.

The sextet of films featuring the original crew of the [[[U.S.S. Enterprise]]] was, at best, an uneven affair. It all began when Paramount floundered throughout the 1970s, unsure of how best to capitalize on the growing fan base for the canceled series. It made sense to launch a fourth television network with a revived Star Trek but when that was derailed, it took a while for them to figure out what to do next. George Lucas and [[[Star Wars]]] changed all that. Unfortunately, the corporate handwringing over the next two years meant we were presented with a turgid film that may have featured the cast but lacked the feel of Gene Roddenberry’s series.

The Motion Picture’s costumes were monochromatic bores, much like the performances wrought by director Robert Wise, and the crew were never really given much a chance to show that they still liked one another. Instead, we’re given some new faces to dilute the story and the conflict between the Enterprises new captain, Stephen Collins, and his predecessor, William Shatner, is never fully developed. Nor is the story about Spock and his search for something beyond pure logic. Instead, we’re left gazing at some kinda nice visuals as V’ger comes to menace Earth. It’s slow, ponderous and more than a bit of a mess. For $44 million, Paramount expected something more satisfying and profitable.

Turning the franchise back to the television division and asking for a fresh start with a quarter of the budget was perhaps the most inspired move. Veteran Harve Bennett was given the show to run and did so by combining with director Nicholas Meyer to give us the single best feature of them all. Why? Because it had everything from nifty one-liners from the crew, a philosophical debate over a truly important matter, a memorable villain and a good guest cast.  Killing Spock to accommodate Nimoy also meant the status quo could change which was a good sign.

The next two films, though, suddenly turned the solid [[[Wrath of Khan]]] into the beginning of a trilogy that really doesn’t hang together. [[[The Search for Spock]]]was crafted to allow Leonard Nimoy back on board but did so without
giving us anything but the most stock of Klingon villains. The
philosophical and moral debates from the previous film are gone and
Kirk watches the son he just met die for no obvious reason. Robin
Curtis, replacing Kirstie Alley as Saavik, wasn’t given enough to show
she could be as interesting a character. Nimoy also made a nice debut
as a director although the film felt claustrophobic and shot entirely
on sets which didn’t help.

[[[The Voyage Home]]] wisely changed the tempo and look. Nimoy
grows as a director and the humor is all character-based which is
terrific. The fish out of water theme nicely works as does the
ecological message. A fine way to bring everyone home and reset the
mission parameters.

Of course, Shatner has to be given a shot at directing but his
ham-fisted story development and desire to search for god without
really exploring how everyone views the deity is a notion that arrives
stillborn.  Shoehorning Sybok into the Spock family tree doesn’t help
matters nor does the lackluster performances by the guest cast. And the
humor here is more slapstick than necessary and the supporting cast is
ill-served.

As a result, Meyer was brought back for what everyone acknowledged would be the final original cast film, [[[The Undiscovered Country]]].
Given an opportunity to go out with a bang, the story is strong but the
execution isn’t quite as sharp as it should be. Overall, it was a
pretty fine way to go out, leaving us wanting more.

Today, we get that in the case of the DVDs with hours upon hours of
extras. Most noteworthy among them is the extra disc with a roundtable
discussion between Shatner, Nimoy, Patrick Stewart, Jonathan Frakes and
moderator Whoopi Goldberg. Here’s a preview:

Each disc comes with its own set of extras, many of which are
already included on the DVD versions. New commentaries and featurettes
freshen each film’s experience. I can quibble that Blu-ray should have
allowed Paramount to include both the original Motion Picture
and the more-recently released director’s cut. The discs collect the
High-Def features plus the special two-disc DVD features, so all
together, you get 2.5 hours or so per film of goodies. New commentaries
are added with the previously released comments which could enhance
your enjoyment of the films, although little will improve [[[The Final Frontier]]]. Roberto Orci and Alex Kurtzman, from the new film, provide some fun commentary on [[[The Voyage Home]]].

Each disc has a link to BD Live with additional features such as quizzes.

Of the six films, only the best, The Wrath of Khan was given
a complete restoration. The rest look better merely because they’re
being watched on Blu-ray. All six, though, sound better than thanks to
Dolby TrueHD 7.1. Dialogue, sound effects and score all sound vastly
improved.

While not as good as the original series season one on Blu-ray, it’s
the best these films will look. While the Human Adventure may only be
beginning, the revamping and reworking of the films may well be a work
in progress so either get them now or wait until some undetermined
future date when remastered versions may arrive. The consensus seems to
be that the lack of a director’s cut or slightly modified edits of the
other films may well mean a new and improved set is in Paramount’s
plans.