Review: ‘Sunny Side Down’ 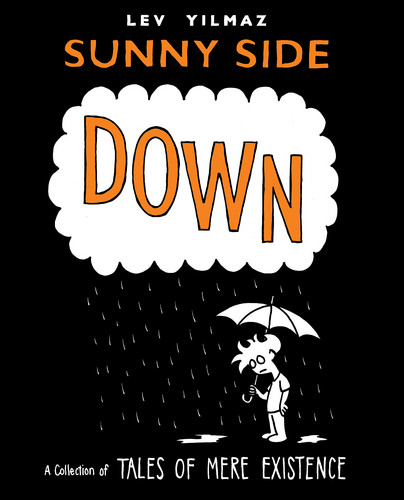 [[[Tales of Mere Existence]]] began as a series of videos beginning in 1999 and now found at YouTube as Levni Yilmaz drew simple cartoons and added a narrative. They were immensely popular and won some awards and now Simon Spotlight Entertainment has released Sunny Side Down

, a collection of those cartoons.

The book, the fourth such collection, attempts to humorously take us from birth to old age and the struggles along the way. At first, the early sections were somewhat reminiscent of Jeff Kinney’s [[[Wimpy Kid]]] books but as his cartoon self aged, the material moved into other realms.

He draws in an engagingly simplistic style and he nicely varies the page composition so you don’t get a feeling of sameness. On the other hand, the same cannot be said of the observations. With age comes cynicism and frankly, by the mid-point, as he ponders life after college, the character is downright pathetic, not funny. The material covered here felt familiar, similar themes have been played out on other web comics and even in [[[Doonesbury]]]. Lev seems to be celebrating the slacker lifestyle as opposed to mocking or questioning it.

He looks at types of girls, types of job hunting and shows how sad and pathetic it all is. There’s weariness to his day-to-day existence as he seemingly meanders from home to school to an apartment. There’s no support group of friends or a positive romantic relation, no job that fulfills him even for a month. The pervasive feeling exists from cover to cover and certainly lives up to the title.

In fact, the sense of despair regarding careers and relationships garners some chuckles but taken as a collection, it’s actually a sad commentary that perpetuates stereotypes of an entire generation.

The book’s concluding chapters, the pondering of the future and relevance with advancing years actually covers some fresher territory although the conclusions are fairly bleak.

Yilmaz is a filmmaker who fell into doing the comic material and he seems to have run out of fresh observations because this all felt very familiar. While engaging and entertaining, there’s nothing new to be said here. If you want to sample this for yourself, try the videos before investing in the books.