Review: Pride and Prejudice and Zombies by Jane Austen and Seth Grahame-Smith 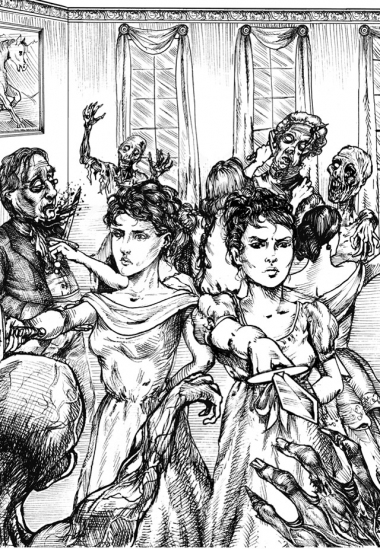 Pride and Prejudice and Zombies

What is there left to be said about the Undead Sensation That’s Sweeping the Nation? The buzz for this book was so loud that they rushed it into publication a few months early (which no doubt accounts for the inconsistently applied British spellings in the text). Everyone and their newly risen mother has reviewed it, or at least written about it, and it’s now spending a second week on the New York Times bestseller list.

As broad farce, the book succeeds. It does a fine job of interleaving the original text with brutal confrontations with the undead, katana swordplay and ninja ambushes. There’s even a note of pathos in the fresh explanation for why Charlotte chooses to marry the dreadful Mr. Collins: she’s been stricken with the zombie plague, and wants to eke out her final days as a married woman before someone must behead and burn her. I also particularly enjoyed the revised faceoff between Lady Catherine and Elizabeth. In the original, Lady Catherine sneers at Elizabeth for not being personally educated by a governess; here, Lady Catherine mocks Elizabeth’s inferior martial arts tutelage in China—apparently true gentlewomen go to Japan to learn how to kick butt.

This is probably unfair of me, but I think I would have preferred the novel more if it had been more subtle and had tried harder to be,well, a comedy of manners. I have no objection to an adaptation that transposes the story to a fresh setting. (My favorite is the Bollywood film [[[Bride and Prejudice]]], in which Naveen Andrews dances and sings in Punjabi. Best. Bingley. Ever.) However, this adaptation is ostensibly set during the Regency, although obviously, a much-alteredRegency, and as such, I find myself missing at least some nod toward Regency behavior.

What many people love (and simultaneously find so maddening) about [[[Pride and Prejudice]]] is watching the two romances struggle to unfold within such a rigid social structure. The original book showcases a society where too much candor is impropriety; Elizabeth’s most cutting accusation to Darcy during his first proposal is that he doesn’t exhibit “gentleman-like”behavior. During his second proposal, the reader never witnesses Elizabeth telling Darcy that she loves him; Austen describes her response thusly: “[Elizabeth] immediately, though not very fluently,gave him to understand, that her sentiments had undergone so material a change…as to make her receive with gratitude and pleasure his present assurances.” How’s that for plain speaking?

In contrast, the zombie menace has resulted in a loosening of mores in the world of P & P & Z.This Elizabeth, rather that merely being outspoken, is a frankly bloodthirsty wench. Instead of wishing to just verbally dismiss Mr.Darcy when she believes herself insulted by him, she’s eager to cut his throat. She is perfectly matched by the P & P & Z Darcy, who threatens to slice out Miss Bingley’s tongue when he grows weary of her constant chatter.

Obviously,Graham-Smith is mocking 19th-century social conventions, but I would have loved it if he’d worked harder to stay within the restrictions of the original novel. For example, several characters in this mashup refer to zombies as “unmentionables.” What if everyone quietly, but effectively, slaughtered the zombies and then returned to the far more important matter of arranging their social lives and fortunes,considering it too ill-bred to even mention the zombie problem in good company? (Mr. Bennett’s insistence on training his daughters as warriors is evidently considered less than genteel, but doing so doesn’t make them unmarriageable, either.)

I suppose that people attracted to a book that promises “ultraviolent zombie mayhem” probably aren’t looking for a subtly constructed, nuanced comedy of manners. On the flip side, those people may not enjoy sitting through the dances,social climbing, and courtship still preserved in the book. But for that slice of readers who enjoy romance mixed with kung fu (hey, they exist; I mean, somebody bought tickets to [[[Crouching Tiger, Hidden Dragon]]]) [[[Pride and Prejudice and Zombies]]] will no doubt offer a giggle or two.

Amy Goldschlager is an editor at findingDulcinea and SweetSearch.

Publishers who would like to submit books for review should contact ComicMixthrough the usual channels or email Amy Goldschlager directly atamy.goldschlager (at) gmail (dot) com.