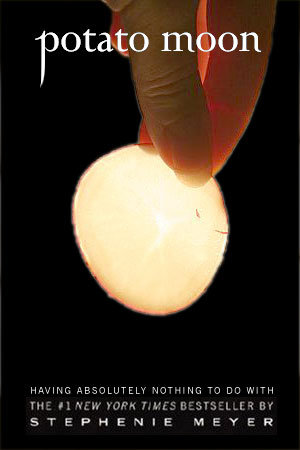 For those who came in late:

"Lady Sybilla" announced the publication of her very own sequel to "Twilight" entitled “Russet Noon.” She claimed that Stephenie Meyer had no copyright protection to her work (very wrongly).

Peter David, writer of stuff, in an absolute state of whimsy*, decided that simply mockery wasn’t enough, and a long, sustained campaign of mockery is what was called for. So he decided to invite people to a gang-fang called "Potato Moon".

And as Peter’s long-time stooge friend, he roped me into creating the cover for all of this, to help set the tone.

The story starts on Friday. You’ve been warned.

* Note: "Whimsy" is the auctorial equivalent of the famous last words, "Hey, everybody, watch this!"