Review: ‘To Catch a Thief’ DVD 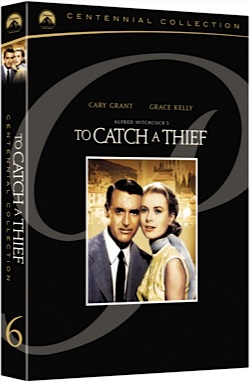 Paramount Pictures ends its tour of the 1950s, for now anyway, with the Centennial Collection edition of Alfred Hitchcock’s To Catch a Thief

. Considered a minor work for the director, it actually holds up exceptionally well through the years and the restored print for the DVD, out now, is marvelous. Being the only Hitchcock film that Paramount still has rights to, this is a welcome part of the celebration.

Hitchcock’s 1955 film, based on David Dodge’s 1952 novel, stars Cary Grant and Grace Kelly and was filmed in location in Europe. This was the first of his films shot in Paramount’s VistaVision, a process similar to Cinemascope and used to compete against television for audiences. Despite the arduous process to shoot, he went on to use it five times but the first proved challenging, not that you can tell in the finished product.

John Robie (Grant) is a retired thief known as The Cat but he leaves his French vineyard when a copycat begins a series of crimes that convinces the police he’s back in action. Posing an American businessman, he begins seeking the most valuable jewels in France to outguess his imitator and along the way romances Francie Stevens (Kelly), daughter of a society woman who owns one of the gems on his list.

The glimpse into French society in fun and the movie moves along with solid pacing and some nice action sequences, notably the first car chase.  Grant and Kelly, in her last film for the director, sparkle on screen together and Hitch does his adept visual innuendo, this time fireworks going off during some serious kissing.

Shot on location makes the film look far different than typical studio fare, aided by Edith Head’s keen eye for costuming the stars, especially Kelly who soon went on to become a princess. The cinematography by Robert Burks deservedly won the Academy Award that year.

Technically, the cleaned print transfer makes this the best edition yet released for home video, with 2.0 Dolby sound lending an assist.

The film comes with brand new commentary from Dr. Drew Casper, Hitchcock Prof. of American Film at USC who provides insights into the production. The second disc comes with the usual assortment of special features. The 2007 edition’s extras are included so you’d be buying this mostly for the restored film itself. There’s also the 23-minute [[[A Night with the Hitchcock’s]]], the USC popular class devoted to the director and his works. The surviving family usually comes to chat at least once per semester and the November 2008 visit was recorded for inclusion. Then there’s Unacceptable Under the Code: Film Censorship in America, the 12-minute featurette looking at the state of film censorship during the 1950s, considered one of the most repressive decades in America (see the Comics Code). This focuses on how Hitch worked around the restrictions with glee.

The [[[Behind the Gates]]] featurette is a six minute look at Grant and Kelly as opposed to the physical production of a film. And Edith Head: The Paramount Years makes a return appearance from an earlier part of the collection.