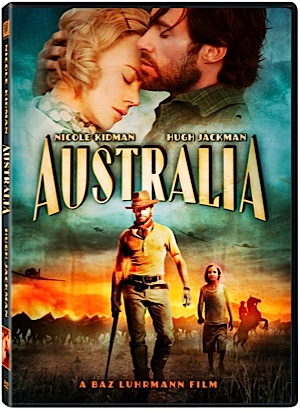 Baz Luhrman is a visual director. Couple him with fellow Aussies Nicole Kidman and Hugh Jackman; one would expect a strong story with terrific scenery and fine performances.

Instead, we got a faded postcard called Australia

.  The overly long film, now out on DVD, is actually two predictable stories melded into one feature.  The first half is a remake of [[[The African Queen]]] repurposed as an American western set in the outback. The second half is a World War II adventure that sort of pits Jackman against the Japanese. Given its highly obvious story points, it’s hard to believe this is a product from the man who gave us [[[Moulin Rouge]]] and a fresh take on [[[Romeo and Juliet]]].

About the only thing unique about the story is the plight of the half-Caucasian/half-Aborigines children taken away by missionaries during this era to have the “savage” beaten out of them.  As a result, the most interesting characters in the film are the “creamy” Nullah and his silent grandfather King George (played by the veteran David Gulpilil).

Jackman may never win an Oscar for his work, but he’s a versatile, entertaining actor who handles action and romance with equal aplomb.  His Droper smolders throughout the movie and his understanding of the aboriginal people is sympathetic in contrast to just about every other Caucasian in the movie.

Kidman’s Lady Sarah goes from spoiled Englishwoman to gun-toting, hard drinking native without any in-between steps and feels unnatural.  Instead of a nuanced performance, which she’s capable of, she feels like she did this to work from home and not that she had any real affinity for the role or story.

Luhrman also seems more interested in the landscape of his native land than the performances which are more two-dimension than we’re used to. The pacing is languid, even for the action sequences, and overall the movie just lays there. It did not perform well at the box office and 20th Century-Fox apparently lost faith in the film which resulted in a DVD that comes with barely any extras.  There are trailers (and not one for [[[Wolverine]]]) and two deleted scenes, neither of which substantively changes the movie.