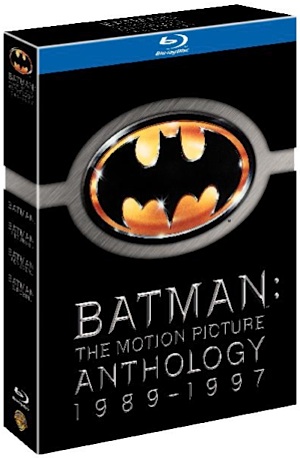 The current era of the super-hero movie can trace its roots to 1989 and the release of Tim Burton’s [[[Batman]]].  For the first time since Richard Donner’s [[[Superman]]], the comic book heroes were taken seriously and adapted for the screen with love and care.  In between, there was failure after failure as no one in Hollywood seemed to understand the source material.

Even Michael Uslan, who did understand, spent 1980 through 1988 trying to mount the film with little success. The stars seemed to finally align as Frank Miller’s [[[Dark Knight]]] in 1986 showed people what could be done with the character and suddenly Warner Bros. was interested. They tapped Burton, coming off the success of [[[Beetlejuice]]], a director with exactly the right sensibilities to take the Dark Knight and present him in a way that made you forget Adam West’s interpretation (at least for a little while).

You’re reminded of what a masterful job he did by rewatching Batman on a new crisp transfer as part of the Blu-ray box set Batman: The Motion Picture Anthology 1989-1997

, on sale today. Gotham City is a dark, scary place, and its populace needs Batman, a vigilante protector. The architectural look, from designer Anton Furst, coupled with the moody lighting and off-kilter sensibilities of its director made Batman something to marvel at. He got fans to get over their complaints that Michael Keaton was the wrong choice to portray Bruce Wayne.  Instead, Keaton was a conflicted everyman who had some serious issues driving him to don the costume and endure the withering barbs from Alfred (Michael Gough). Jack Nicholson’s Joker nearly stole the movie but was a terrific foil for the hero.  The movie’s far from perfect with story holes and logic gaps (one bullet can take down the Batwing?).

Burton and Keaton came back for [[[Batman Returns]]] which unfortunately offered us no new insights into the hero but did give us refreshed looks at both Catwoman and Penguin. Selina Kyle’s story arc is the strongest in the film and Michelle Pfeiffer gives a strong but sympathetic performance.  Danny DeDevito made for a creepy, grotesque Penguin but his arc was taken from a 1967 plot and felt it.  The uneven storylines never meshed well and the movie felt divided.

That feeling should have pervaded the third installment, the oddly titled [[[Batman Forever]]]. Burton and Keaton moved on, neither wishing to be stuck with the franchise despite Warner’s desire for continued profits. By then, they felt Burton’s tone was getting too dark and off-putting to the audience they really wanted, kids and their families.  As a result, they turned the keys to the Batcave over to Joel Schumacher, who was not a bad choice on paper.  His film lightened the tone immensely, switching for a colorful palette and ignored the forbidding character of Gotham, letting it become a generic city.  Instead, he lavished time and attention on Jim Carrey’s Riddler, but felt obligated to have a second opponent and used Two-Face. Tommy Lee Jones is wasted in this part and the entire character served little purpose nor was it written well enough to explore the wonderful schizophrenia that turned Harvey Dent into a coin-tossing foe.  The movie is further bloated by introducing Chris O’Donnell as Dick Grayson, probably a good five years too old for the role. On the other hand, Val Kilmer makes a wonderful Bruce Wayne and solid Batman and I would have been delighted had he stayed on.

Instead, Schumacher goes over the top to kill the franchise for a decade with [[[Batman & Robin]]], the worst film in the set.  His commentary track is lackluster but appropriately apologetic. The blame is placed squarely on Warner’s bosses who wanted merchandise options so he served them up via Akiva Goldsman’s absurd script that shoved Batman, Robin, Batgirl, Mr. Freeze, Poison Ivy and Bane into a glitzy story that made you miss the ABC series.  Take any portion of the film and you had the kernel of a stronger story.  Mr. Freeze’s desire for revenge out of grief for his ill wife or Poison Ivy’s desire to control me or Barbara Wilson’s coming to Gotham and discovering her destiny could have been good script material.  Tossed into a chromatic blender it’s a mess.  George Clooney has practically turned apologizing for taking the lead into a mantra and well he should given his sleepwalking turn as the Caped Crusader.

Each film’s unique quality looks more textured with the transfers that use 1080p VC-1 and 1.78:1 specs.  The films come in Dolby Digital 5.1 and a plethora of languages. So, they look sharp and sound pretty great which is perfect for the first two and Danny Elfman’s terrific scores.

These days one of the key reasons to buy the Blu-ray version of a film comes down to the extras. Everything from the 2005 box set is included in their standard definition incarnations, making them pale in comparison to the films they support. As a result, you get in-depth looks at how each of the films were made from commentary tracks through featurettes you may already own or saw at conventions during the marketing of the films.  It’s nice to see the comic book history preserved along with self-congratulatory hype from co-creator Bob Kane. Those curious as to how the comics get adapted for film will find some nice tidbits on the first disc. Film buffs will like how to craft a sequel in a piece on the second disc.

On the third disc is a look at some deleted scenes that showed what Batman Forever could have been and makes me long for a stronger movie. The final disc does demonstrate through its extras how deeply regretful the filmmakers, not just Schumacher, were in letting commerce win out over art.

There are music videos and trailers which round out the complete box set.

If you don’t want it all, a 20th anniversary [[[Batman]]] single-disc will be released in May with the others sure to follow.  Owning the first box set means you can skip the Blu-ray version unless you’re a diehard fan and completist.  On the off chance you don’t own any of these, the box set may be the best option if you can find a deal since the $129.95 is somewhat excessive given the lack of Blu-ray exclusive content.