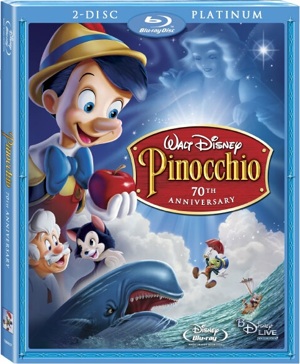 Walt Disney learned much from the work performed in [[[Snow White]]], his first animated feature.  The story was fairly basic and almost too short and to the point. For his second outing, he intended for something to further demonstrate his mastery of the animated form. As a result, his work in translating Carlo Collodi’s [[[Pinocchio]]] from book to cartoon kept changing through the production and as a result, the finished product was a giant leap forward.

The lush color palette and ease of motion employed by the characters is confident, evoking a storybook feeling while telling an entertaining tale.  You’re reminded of all this when re-watching the film on the new 70th Anniversary DVD

Disney took the popular 1883 novel, which focused largely on social themes and reshaped it into an American kid-friendly story with heavy lessons to be imparted. Interestingly, the movie, released February 7, 1940, didn’t fare well at first thanks to the global concerns over war, but grew over time to be an enduring classic.

How the book was adapted complete with an alternate ending is just part of the anniversary extras included on the Blu-ray and two-disc standard DVD editions. The Blu-ray also includes the single disc DVD which has just the movie, some trailers, and some music videos. The rest of the goodies, of which there are many, were not available for review since just the Blu-ray was provided to journalists.

So, let’s talk about the movie.  The story of the kindly toy maker, Geppetto, who constructed a boy puppet as a substitute son, is a lovely beginning. The turquoise fairy (renamed the simpler blue fairy in the movie) arrives and bestows life on the toy and promises to turn him into a real boy if he learns to behave and accept the responsibility that comes with life. Being entirely naïve about what that means, and presuming Geppetto too old to teach him, the fairy taps Jiminy Cricket to play the role of conscience. The boy begins a series of exploits that shows the audience the need to listen to the little voice in the back of your mind.

Pinocchio is easily lured away from the tried and true path, such as attending school, for the easier vices.  He’s constantly taken advantage of by adults, both human and anthropomorphic.  By film’s end, none of them are made to pay for their perfidy. In fact, they remain at large; tempting others to stray while Pinocchio, having learned his lesson, returns to Geppetto’s loving arms. As they manage to survive the whale Monstro’s hunger, Pinocchio earns his human flesh.

The animation is lush, the backgrounds colorful.  A lot of time and attention is given to showing off, especially early on in the toy shop as the various creations perform.  Later, there’s tremendous activity in the background, notably when Pinocchio and Lampwick find the other boys who are a busy bunch.

We all know the songs from the film and the signature moments such as the wooden boy’s nose grow long enough to house a bird’s nest when he lies.  There is a gentle humor to Jiminy’s commentary and affection runs strongly through the good characters.  It’s not a terribly scary movie, compared with the chilling Queen-turned-witch in the previous feature.  There are thrills, such as the escape from the whale, and the 88 minutes pass with nary a lull.

The film transfer is crisp, the colors as rich as ever.  The sound is sharp. If this is not in your family’s video library, it probably should be and you have three versions to pick from so it all depends upon how many extra bells and whistles you want.