Review: ‘Saga of the Swamp Thing’ Book One 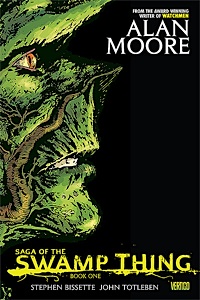 When a comic book gained a new writer, before 1983, they would either keep the status quo, as the writers succeeding Stan Lee did throughout the 1970s, or change the locale and supporting cast (see [[[Supergirl]]] and [[[Wonder Woman]]]’s various careers). Until 1983, no one really rethought the character or series premise.

That is one of the main reasons the arrival of Alan Moore at DC Comics was so pivotal.  He was a long-time fan of DC’s output and had brought his own point of view to the series.  When Swamp Thing co-creator and then-editor Len Wein asked him about taking on the series, Alan had no problem with suggesting his radical rethinking of the premise based on what had been established to date.  Nothing out of left field, but a fresh look at a long-standing character in the DC firmament.

Not only was the thinking fresh, but the writing was also lyrical, something not seen in American mainstream comics.  During the 1970s, “purple prose”, lots of words trying to convey mood and feeling but really just a ton of verbiage, was in vogue and as the 1980s dawned,the state of Americna super-hero writing was fairly mundane.  Once more, Moore stopped everyone in their tracks as he used short phrases and captions to suddenly convey mood, feeling, and foreshadowing.  The repetition helped tie a story together as did his clever use of words to transition from one speaker and scene to another.

The result was revolutionary and propelled [[[Saga of the Swamp Thing]]] to the top of everyone’s To Read stack.  The book was the first true shot in the British Revolution that helped change mainstream comics for the next two decades.

In rereading Moore’s first eight issues in the newly released hardcover Saga of the Swamp Thing, it’s clear to see what Moore brought to the character, the title, and the company. The clarity in thinking, fresh approach to character and captions, and the ability to redirect a title are obvious and stand up after all these years.

Not only did Moore rethink Swamp Thing, he also rethought his supporting characters, building upon what his predecessor, Martin Pasko, did without trashing the work.  He began to explore the greater DC Universe by using Jason Woodrue as the first antagonist, and then brought in Jason Blood/Etrigan showing us he was more than one-trick pony.  In the former, Woodrue had been a neglected Atom villain who was an ideal foe for Swamp Thing and the perfect vehicle for “[[[The Anatomy Lesson]]]”, the aptly titled story that reset the status quo.

For the first time, Moore’s debut issue is reprinted.  While it tidied up some of Pasko’s dandling plot lines, it also really began to set the stage and it a welcome addition to the hardcover. You get a taste of what is to come and works well with the other stories.

Also carrying over from Pasko’s run is the art team of Stephen Bissette and John Totleben.  Fairly fresh to comics at the time, they were an ideal team for the character and quickly improved their work, clearly inspired by Moore’s work and openness to their input. Some pages are overly cluttered while others are beautifully designed and you can watch them grow during these eight issues.  They have as much to do with the title’s resurgence as Moore and should never be overlooked.

The collection comes complete with a nice intro by Wein who explains the character’s birth in real world terms and then we get an essay from Ramsey Campbell that heaps additional praise on the creative team.  Moore deserves his accolades and the hardcover treatment is a welcome addition. If you have never read these stories or no longer have them in your collection, this is a well-priced volume worth having.