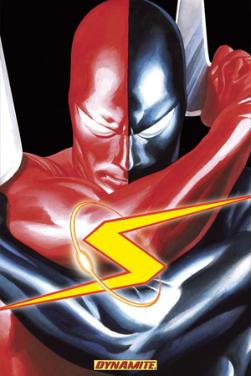 When [[[Superman]]] whet readers’ appetite for costumed champions, comic book publishers responded and for the next decade, hundreds of characters arrived.  A handful survived through the changes in publishing and most of the others were consigned to the second hand shops and the vault of memory.  As a result, many fell into public domain, allowing anyone to dust them off and bring them back into print.

As a result, the notion that Alex Ross was going to spruce up dozens of heroes and sidekicks for his pal Nick Barrucci is certainly an exciting one.  Ross partnered once more with writer Jim Krueger to figure out what to do with them all.  The resulting series, Project Superpowers

, debuted amidst much fanfare last year and the first storyline was collected in December by Dynamite Entertainment in hardcover.

What do you do with an army of heroes whose powers and abilities are currently familiar to generations of readers?  You could go in several directions and the creators chose a tried and true concept: the heroes of World War II vanished, the world changed for the worse, and now they’re back and realize how needed they are.

The Fighting Yank is led by his guiding spirit to capture his allies in a magical urn otherwise things in the years following World War II would get darker. Suddenly, the heroes and their sidekicks are taken without permission and trapped.  In the intervening years, America becomes a despotic country, casting an ominous shadow over the rest of the world. An aging Fighting Yank is enticed by the Spirit of America, a disembodied American Flag, to find the urn and release its contents.  This puts him in direct conflict with Dynamic Man, who, with his family, seem to be ruling America.

When the heroes are released, they are scattered around a world they do not recognize and their powers are altered.  The remaining story shows what happens next.

The story moves along briskly but that’s the problem.  At no time do the creators properly introduce us to the dozen-plus heroes, establishing who they are and what they can do before telling us their old powers are changed.  Nor are we really given an understanding of how America’s power is perceived around the world.  Are there allies?  What about the Communists in China and Russia? Also, how does the change in politics affect society and commerce?  No clues are really provided.

There are so many heroes here, Krueger struggles to make them sound distinct and he falls short.  They all seem to marvel over nothing new except television, which is anachronistic considering TV was spreading almost immediately after the close of the war.  His ponderous narrative captioning is a reminder of [[[Planet X]]] and [[[Justice]]], previous collaborations with Ross.  Now, though, it’s been overdone and something new was required. Also, you never name an army F-Troop since readers recall a sitcom, taking us out of the story.

Stephen Sadowski, no stranger to teams, drew the zero issue and does a nice job. The main miniseries drawn by Carlos Paul and colored by Debora Carita is far duller and less vibrant.  Everything is dark and Paul does not do a great job differentiating the characters, their physiques or emotional expressions.  There’s a dimness to the pages that doesn’t help the reader identify the characters or place.

Issues #0-7 are collected here, setting the stage for spin-offs and additional stories for 2009, so this is a Must Read if you like the characters or creators. It’d be nice if the [[[Wizard]]] story appeared here as well. The hardcover is a visual treat as we see all the covers, the character sketches and the like.  The 12-page Golden Age Character Reference shows us far many more characters than are seen in the story but we’re told nothing about who they are and why the ones chosen found their way into the story.  There’s a complete lack of contextual explanation about who these people were and what their appeal was to Barrucci or Ross.  An historical essay was essential and is sorely missed.

There’s a lot of promise and potential here, but this first storyline is murky and misguided so one hopes as the focus tightens, the characters come into sharper relief and we can discover their appeal for ourselves.