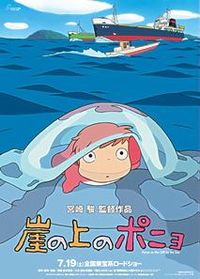 * Producers Frank Marshall, Kathleen Kennedy and Pixar’s John Lasseter are working to guarantee a huge success for this summer’s release of Hayao Miyazaki’s new animated movie, Ponyo on the Cliff by the Sea, according to Variety.  Their aim is to increase the number of movie screens where Ponyo will open here, and thus the box office receipts, from Studio Ghibli’s previous US record for Spirited Away, which earned $10.1 million on 714 screens according to Box Office Mojo.  The English voiceover cast for Ponyo will feature Matt Damon, Tina Fey, Cate Blanchett, Liam Neeson, Betty White, Lily Tomlin and Cloris Leachman.  Ponyo was Japan’s biggest movie of 2008, grossing $165 million.

* Dan Goldman is telling the story of the 2008 election, and has a twenty page preview available as a PDF. I won’t spoil the ending for you.

* Happy Public Domain Day for the rest of the world. We won’t have any new entries here for a few years.

* I nominate this as the top anime fansub of 2008. Do I have a second to the motion?