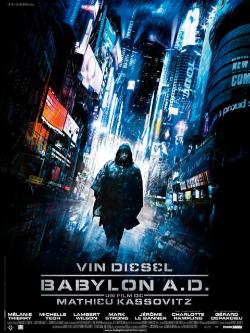 is actually two separate films, one with some noble themes worthy of exploration and one that is a derivative action film.  Unfortunately, you have to suffer through the latter before the film oddly shifts gears and begins lightly exploring the former. The film is based on Maurice Georges Dantec’s [[[Babylon Babies], a science fiction novel exploring the notion of artificial intelligence being given organic life. In an interview on the DVD, on sale Tuesday, he wisely notes that he had written the book, said what he had to say and left the rest up to the filmmakers.

In the hands of writer Éric Besnard and French director Mathieu Kassovitz, the movie is a mess. The dark near-future, Europe has collapsed and anarchy or big business rules in place of government.  Vin Diesel stars as Toorop, a mercenary, who is coerced into boydguarding a young woman, heading from his monastery home to New York City.  Given little choice, he agrees and discovers she has a chaperone, a strong-willed Michelle Yeoh.  The girl, Aurora (Mélanie Thierry), seems an innocent at first but then begins displaying knowledge and experience impossible for someone raised in solitude.

Of course they’re chased and that’s where the mindless, seen-it-before action comes in.  While Diesel excels at this sort of stuff, it was not in the least bit thrilling, with the exception of the chase across Alaska.

Upon arrival in New York, the film suddenly changes gears and tone as we begin exploring the concepts involved but they are done in a monotonous way set against opposing forces who wish to control Aurora’s immaculately conceived children and the future of mankind. While there are plenty of good notions here, they’re buried under poor acting and pacing.

Diesel and Yeoh form an interesting bond during the few quiet moments but Thierry is such a blank slate it’s hard to tell if she has any talent. Lambert Wilson and Charlotte Rampling are wasted as the creators of the AI and therefore battle over its destiny.

Kassovitz blamed 20th on butchering the film and abandoning it this August after he labored for five years on bringing it to life.  Unfortunately, after five years of development work, one expects a more even, better conceived production.  Even the music from the normally reliable Hans Zimmer is uninspired.

Fox is releasing the film with the theatrical release and an unedited version, which does not help the story one whit.  The plethora of extras are nice, especially as you hear Dantec talk about his book and it makes you long for a film that interesting.  There are the usual making of features including a nice one on the arctic chase.

A special edition two-disc set comes with a few extra features including an animated prequel (erroneously billed as a graphic novel) that fills in some of the dramatic gaps that would have enhanced the overall production. A second disc contains a digital copy for computers and iPods.