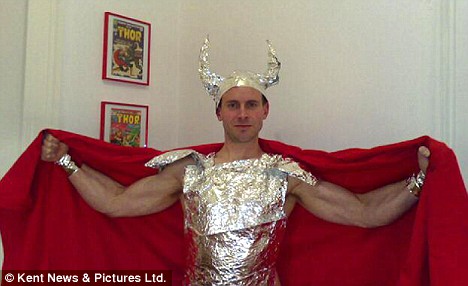 Kenneth Branagh can stop looking for who to cast for his Thor movie. From the London Daily Mail: Burglar flees in terror after homeowner returns from New Year party… dressed as Thor, God of Thunder

A muscle-bound building boss who came home from a New Year’s Eve fancy dress party kitted out as Thor scared off a burglar by charging at him in his superhero outfit.

Six-foot-tall fitness fanatic Torvald Alexander, 38, was wearing a full God of Thunder outfit – complete with flying red cape and tinfoil silver-winged helmet – when he spotted the raider in his front room rifling through a desk.

Mr Alexander, who runs building firm Alexander & Summers in Edinburgh, Scotland, said the burglar threw himself out of a first-floor window of his £350,000 home in the Inverleith area of the city when he opened the door and confronted him.

Lucky Ken. He doesn’t even need a costume designer anymore.