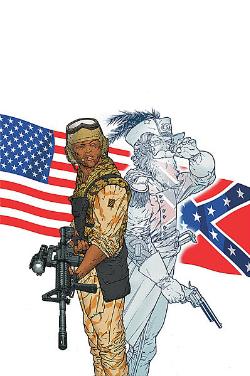 The [[[Haunted Tank]]] has to be one of the oddest war comics concepts ever published.  A descendant of Civil War General JEB Stuart is haunted by the Virginian during World War II.  While the rest of his crew thinks he’s got a screw loose, Jeb Stuart gains vital tactical knowledge and inspiration from the ghostly guardian and together they mowed down countless enemies in the pages of [[[G.I. Combat]]].

DC recently reprinted many of those entertaining tales in a Showcase volume and that comes highly recommended.

The concept of a descendant looking after another was carried forward in Kurt Busiek’s [[[Power Company]]] as the World War II Stuart’s spirit haunted the Cyber-Command Assault Vehicle, a modern day tank commanded by his granddaughter, Lieutenant Jennifer Stuart. Jen Stuart.

Clearly, JEB had unfinished business and returns to guiding yet another member of the Stuart family in Vertigo’s new miniseries, Haunted Tank.  This time, though, the Southerner is looking after Jamal Stuart, an African-American with blood ties to the Virginia slaves owned by the Stuart family.  The racial tension appears to be the fuel for the series as written by Frank Marraffino.

His dialogue is easy going but other than pop culture references and curse words, he doesn’t do enough to differentiate the tank crew of G.I.s despite them coming from different ethnic and racial backgrounds.  He’s helped out by Henry Flint’s lively artwork and clear storytelling.

Set in 2003, the tank has been separated from its pack in Iraq and is beset by hostile forces when the ghostly general makes his first appearance. Unlike previous appearances, he can manifest his form and actually manipulate the controls of the tank and fire the machine guns.  His arrival spooks the crew, all of whom can see him this time, and they slowly come to accept his presence and aid.

The first issue, which went on sale last Wednesday, is all set up and done well enough that you know the players and set-up but it’ll fall to the four subsequent chapters to see if this works.  If all they do is bicker about race and sins of the past, it’ll become old real fast.  Will the General’s eyes be opened by the mess of the Iraq war and will that make his sage advice obsolete? Can the crew be taken seriously if they’re aided by a ghost?

How this plays out will determine if the updating of the Robert Kanigher-created series works or nor.  So far, I’m intrigued.