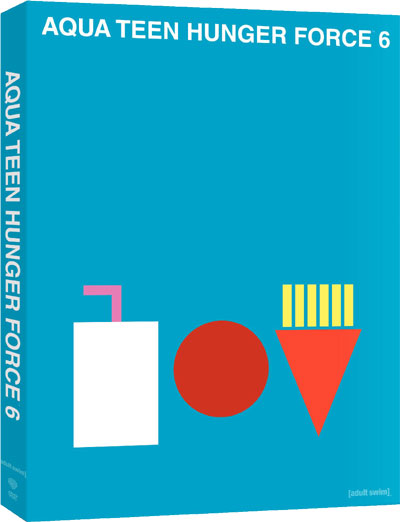 Growing up, my animation was largely the Saturday morning variety, the Hanna-Barbera output where kids never questioned a talking penguin and walrus on globe-trotting adventures, receiving wisdom from a human professor with a magical chalkboard. As I grew up and animation evolved, I realized the kinds of cartoons were splintering for the variable demographics, a change largely brought about my the advent of cable television.

Today, there is the most basic of animated fare for the wee tots all the way to sophisticated anime for adults.  And in between are the shows for teens and young adults, the very life blood of Cartoon Network’s Adult Swim block of shows. Among the most popular has been [[[Aqua Teen Hunger Force]]], a show I have managed to miss since its debut in 2000 before there even was an Adult Swim.

I finally had a chance to sample the series when Warner Home Video sent me Aqua Teen Hunger Force Vol. 6, containing nine episodes from the current season plus four unaired stories.

Even the most absurd of concepts has some sort of logic to hold everything together.  This show is a series of random character types held together with atrociously limited animation.  Anything and everything happens in these stories with no internal logic per episode and a tremendous amount of poor humor.  Considering this spun off from [[[Space Ghost: Coast to Coast]]], which was “smart” in its inanity, ATHF just makes no sense.

I prefer smart, literate humor but am not adverse to absurdist or slapstick humor.  A steady diet of this without any rhyme or reason leaves me cold.

If this is what passes for popular teen humor and animation, then I’m pretty pleased to be too old for this stuff.