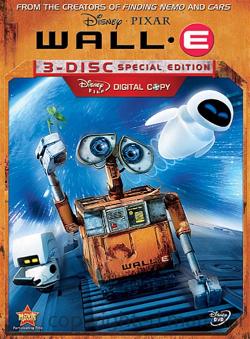 Pixar movies are the kind of family movie you can enjoy without the family.  There’s something there for the adults and the themes tend to be universal ones. Pixar’s creators understand how to think and laugh like a kid and tailor their movies for the broadest possible audience without feeling the need to dumb down the content or characterization.  Instead, their movies are smart and funny and usually heartwarming.

For the first time, a socially responsible theme became a focal point in [[[Wall*E]]] and it’s a welcome one. The movie, out on DVD today, tells of an Earth where consumerism has ruined the planet, making it uninhabitable.

The Wall*E units tried to keep up with the trash but failed, until one is left.  Humanity is long gone, mostly relocated to a pleasure yacht voyaging amongst the stars.  Wall*E has gained an unusual degree of artificial intelligence and as a result has wistful thoughts about being with others, hence his repeated watching of [[[Hello, Dolly]]] on a battered video tape.  His longing to hold another’s hand is heartbreaking.

His years of solitary toil end when an exploratory craft comes and dispatches an EVE unit to seek evidence of organic life symbolizing the planet being ready for repopulating. Wall*E is, of course, smitten with the sleek, rounded object.  Slowly, she exerts her own individuality and budding friendship forms.

Wall*E follows her back to the ship and by then, the beeps and clicks are supplemented with other sounds including human voices.  We meet the last remnants of humanity, soft, obese forms that had mechanical support in every aspect of their lives.  When Wall* E arrives, several are woken up to learn there are other ways to live.

As Wall*E pursues EVE, the ship’s captain is fascinated about returning to earth and what that would mean.  He comes into conflict with the ship’s Auto Pilot who is fulfilling its final commands from the original designers: Earth is dead, you cannot come home.

The struggle to exert free will is the overall theme of the film but told in such a delightful way that you don’t realize until you sit to write the review. Watching the 98 film, you laugh at the winks and nods to other SF classic movies and the patented Pixar humor. There’s little doubt they succeeded given its universal praise and steep box office receipts.

The three DVD set comes complete with a digital copy disc along with bonuses galore. “Presto”, the de rigueur Pixar short that opened with Wall* E is here and is a salute to Loony Tunes.  A new short focuses on Burn*E, a repair robot and is cleverly intertwined with the film’s events so you can see how frustrating it is to fix a light pole when Wall* E is around.

There are some legitimate deleted scenes along with director Andrew Stanton’s commentary.

The second disc is replete with the usual Disney assortment of background pieces including “[[[The Pixar Story]]]”, additional deleted scenes (yes, they should have all been on one disc) and Making Of featurettes. For the youngsters, there an interactive storybook. Al together, this is a must have item and certainly should find its way under many a Christmas tree this season.