Review: ‘Batman: The Brave and the Bold’ 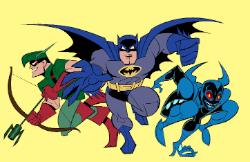 Since his debut in [[[Batman: The Animated Series]]], Warner Animation has seen to it Batman gets freshened every now and then.  Animators swoop in, streamline the look and adjust the stories as time and tastes change.  The most recent Batman series was perhaps the worst as it veered further and further away from its comic book source material so we suddenly had a Rastafarian Joker who knew martial arts. That incarnation has been mercifully retired and in its place we have [[[Batman: The Brave and the Bold]]].

As the title suggests, this is a Batman team-up show and owes much to the title where Batman co-starred with other characters for over 125 issues. The designs puff up the Caped Crusader so he looks as if Carmine Infantino or Mike Sekowsky was doing the model sheets.

Fortunately, the resemblance to the 1960s more or less ends there as the storytelling is quick and adventurous.  This is a well-adjusted Batman who recognizes his place in the super-hero firmament.  For example, in the debut episode, which airs on the Cartoon Network this coming Friday night, he specifically asks Blue Beetle along on a mission to check him out.

To get Batman airborne, rather than the B&B’s tried and true whirly-bat, his wings can stiffen and ignite miniature jet engines while his cowl can turn into a rebreathing space helmet.  You blink at the absurdity of the moment but things are moving along so quickly you accept it and move on.  They find themselves on a distant world where the inhabitants are being attacked by Kanjar Ro who actually wants to use them as fuel. The previous owner of the high tech scarab defended them and they are honored to have [[[Blue Beetle ]]]back to save them.  In an amusing twist, they see Batman as the sidekick.

Beetle’s characterization and learning curve matches the underrated DC title and the two play off one another very nicely.  But the real comfortable team-up is in the pre-credit sequence as Batman and [[[Green Arrow]]] fight Clock King.  The camaraderie and banter between the two made me smile and I look forward to them sharing a full adventure.

All in all, this series looks to remind us about the joy of super-heroes and comes highly recommended.