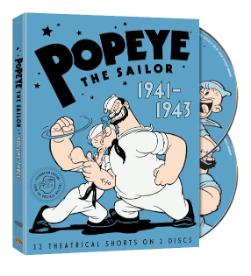 By 1935, [[[Popeye the Sailor Man] was considered more popular than Mickey Mouse and his animated exploits thrilled theater goers year after year as the Fleischer Studios continued to churn them out almost monthly. When they began running on television, the animated exploits delighted a new generation of viewers and keeping the character viable long after his comic strip passed its peak.

Warner Home Video finally cleared all the legal problems and began to restore and collect these classic cartoons on DVD.  The first volume, four discs and 60 episodes, came out to great acclaim in 2007.  A second two-disc set came out earlier this year and on Tuesday, the third volume will be released.  On this set, another 32 cartoons are collected, covering 1941-1943.

By this time, there was evolution to characters and the content.  First, in May 1941, Paramount bought out the Fleischers and by year’s end fired the feuding brothers and changed the name of the outfit to Famous Studios. Along the way Popeye was softened and made less ugly and more adorable.  His dark sailor suit was also traded in for Navy whites as he enlisted when America entered World War II (an outfit he’d wear through the 1960s).  As a result, much of the content has patriotic themes and imagery.  Interestingly, we often saw the Sailor Man confounded by the complexity of modern warships leading to much fish out of water humor. There’s one, “Many Tanks” where Bluto is seen in the Army, swapping uniforms with Popeye so he can date Olive, leaving a confused Popeye manning a tank. Being the war, of course, the depiction of the Japanese opponents are stereotypical and offensive to today’s eyes but a product of their times.

In the end, though, Popeye always comes out on top and is recognized for his heroism. 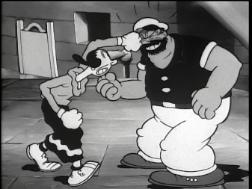 In the previous years, Poopdeck Pappy had been introduced and this set starts off with several shorts where the cantankerous old coot causes trouble. So had Sweetpea who only appears in a handful of cartoons during this era.  Instead, the cartoons begin to resemble the Disney output by replacing him with the annoying quartet of nephews Pip-Eye, Pup-Eye, Poop-Eye, and Peep-Eye.  As with Donald Duck, the sibling responsible for these ill-behaved brats is never mentioned or seen.

The immortal triangle between Popeye, Olive Oyl and Bluto is downplayed during these years and pops up only a few times while other members of the ensemble come and go with nary a sight of J. Wellington Wimpy (despite his being depicted on the packaging). The somewhat annoying Pappy is also largely absent once we shift to a war setting. Things like the victory garden, rationing, and war preparedness do get seen time and again.

These were to be the final black and white cartoons as the studio shifted to all-Technicolor production by the end of 1943 as we’ll no doubt notice by volume four.

The collection ends with Popeye attempting to create his own cartoon which harkens back to the Fleischers’ earliest cartoons featuring Koko the Clown. Conveniently, among the extras are three of Koko’s silent adventures Out of the Inkwell. We’re also given the second installment of “Forging the Frame” which began in the first volume.  This one covers 1921-1930 and shows the continued evolution of all animation through the introduction of sound and we see glimpses of Koko, Betty Boop, Popeye, and Felix the Cat. 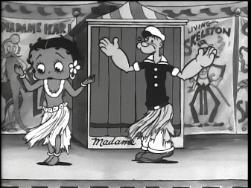 Other extras include a brief and seemingly incomplete profile of studio animator Myron Waldman and a look at Popeye’s entry into the war effort.

Seven of the cartoons come with commentary from a variety of people from notable historian Jerry Beck to [[[Ren & Stimpy]]] creator John Kricfalusi. As a result, the quality varies but they are all useful as they note the changing animation design for the characters as well as the complex and detailed backgrounds getting simplified.

Watching the cartoons today, they evoke memories of first watching them as a kid.  The most inventive of the cartoons, such as “Nix on Hypnotrix”, remain amusing and are a testament to the inventiveness of the Fleischer Studios’ staff. Fans of great animation and fun characters can do little better than this entry in the growing classic animation library.