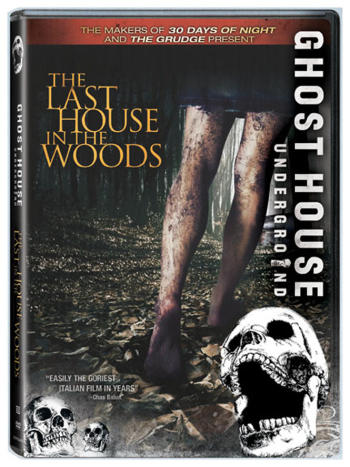 All Aura and Rino wanted was to find a secluded place where they could make love in nature, but the appearance of three sadistic bullies soon sends a romantic evening alone careening into violence. In the ensuing struggle, the couple is tortured nearly to death. Mercifully, the couple is rescued by tough-talking Clara and pistol-packing Antonio. After chasing the attackers away, Clara and Antonio offer to take Rino and Aurora to their remote cabin in order to recover, an offer which the frightened youngsters appreciatively accept. Upon arriving at the isolated abode, however, Rino and Aurora quickly realize that their troubles may have just begun.

Those who enjoy any type of horror flick that would normally read on a marquee “GORE FEST” will enjoy this picture. Almost derived from a [[[Texas Chainsaw Massacre]]] script, there is plenty of dismemberment, gore, and even some intense makeup throughout the film which will make you cringe-o-plenty. The title, which isn’t the original–but changed when released for the US–wants you to compare this to Wes Craven’s [[[Last House on the Left]]], and while there are a few similar elements, this needs to be taken as a seperate, gory slasher film.

The family in question might as well be related to the [[[Addams Family]]] with a Morticia lookalike and a group of deformed brothers that would scare off the cast of any Rob Zombie Flick. The most interesting thing about the film and all of it’s American Horror influences is that the film isn’t American at all, and comes from Italy. This is another case where you will have to do some reading and watch the film in Italian while reading the subtitles, as the America dubbing is pretty awful. I do issue a warning though: the subtitlers become a bit lazy in the last 30 minutes of the film, with spelling and grammar errors galore, so watch out.

The special effects and make up are pretty much what drive this gritty, low-budget film. Some great bleeding limbs after a dismemberment-by-chainsaw and nice, clear shots of stabbing and gunshot wounds. There as surely no shortage of prosthetic skin and corn syrup on this set. Another nice-but-random set of effects was the makeup on the two hillbilly brothers. One has a baseball sized goiter on his neck while the other has half of his face burnt off. Both of these were done pretty well and will make you squirm for their remainder on screen. The cannibalistic child, who was supposed to have these incredibly sharp teeth, ended up just having misshapen baby teeth, which may have still been off-putting, definitely wasn’t scary.

The story isn’t bad up until the last act, in which things become a bit foggy and confusing. There is yet another attempt at a twist ending, but it gets lost in the fray with the tremendous bodycount that accumulates by act three. The final twist, which is really supposed to irk the audience, is a child with prosthetic stumps for limbs, but it is pretty easy to see through the trick, and only looks like a bad Halloween costume. Overall, it may be worth a watch, but if you’re weak at heart, I wouldn’t recommend the film.