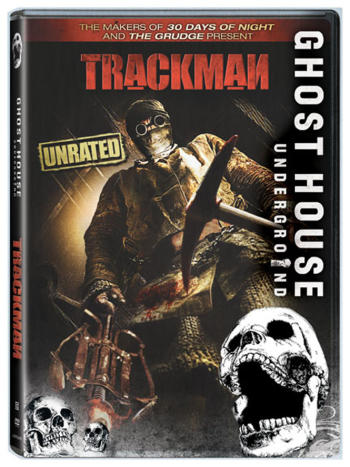 A perfect bank heist turns deadly when the robbers and their hostages flee to the abandoned underground subway station where they encounter the Trackman, a deformed madman that prowls the darkness. It becomes a fight for survival as the mysterious monster picks off the people, both good guys and bad, one by one.

Remember the days when horror films didn’t need a twist ending? When Freddy Krueger never turned out to be Nancy’s father, or Michael Myers was never just a part Laurie’s subconscious? Those were the good old days, but since the genre has been changed by things like Saw or the trend of remaking Japanese horror, it’s almost like a rite of passage to have a “mind-altering” twist at the end of the film, and quite frankly, its getting old.

Trackman has some great slasher movie elements to it, buried deep inside of a poorly edited and badly shot film. Having that the film was made in Russia, I may not be up to speed on how things are shot and edited there, but I’m pretty sure taking a page from Zack Snyder’s book of “unnecessary slow motion” is universally unacceptable. At least when Snyder does it, it’ during a moment of deep(ish) drama to accentuate the moment, and not just establishing shots of dark hallways slowed down to fill time. The film weighs in at 80 minutes, but if you were to dump the slo-mo shots, we’re looking at more like an hour.

The beginning kicks off with a very “Inside Man” feeling, with two men going over the plan for a bank robbery. The robbery goes on, some unneeded blood was shed, and the robbers escape with a few hostages for good measure. Their plan, for some reason, involves roaming around an abandoned tunnel system where (here’s when things get fun) they come across the Trackman.

The origin of the “monster” is done through about two lines of dialogue and something about Chernobyl, but is vague and pretty borders on being convoluted. The great thing about the Trackman is that he had just about all of the elements that made Jason Voorhees so scary for decades: covered face, skulky, had the ability to appear and disappear when needed, wielded a pretty big weapon, and even had a memorable rattle (replacing the Ch-Ch-Ch-Ka-Ka-Ka with some pretty heavy footsteps). The twist in the end of the film, however, negates all of this as we learn that the monster may not be all that monstrous.

The gore is done on a pretty low budget for the film. The big shtick that the Trackman has is a makeshift eye-scooper that he uses to rip out the eyes of his victims and keep. The act of scooping is done all off camera with screams, and even the more gory slasher-type kills are done off camera. A bit of a rip off for the fans of the genre who remember the days of Jason hacking away pieces of campers.

While the film does have its flaws, it makes up for it by bottling what we all loved about the slasher films of the 80s. There are some great moments of suspense and horror, and there may even be room for a return of the Trackman, provided they can find another reason to go into an abandoned Russian mining tunnel.