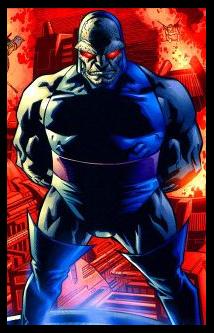 as the Old Gods. Eventually, there came a time when the Old Gods died and their planet, the "Third World", was destroyed. After many ages, the remnants of this world formed into two new planets, collectively called the "Fourth World." There was the peaceful and beautiful New Genesis, watched over by Izaya the Highfather, and the dark, desolate world of Apokolips, where lived the dark prince Uxas.

Uxas started a life of evil early on. When his brother Drax attempted to master a cosmic energy known as the Omega Force, Uxas decided he wanted the power for himself. In one fell swoop, he disrupted Drax’s plans, becoming master of the Omega Force and leaving his brother for dead. With his new power, Uxas renamed himself Darkseid the Destroyer. Later, he killed his own mother Queen Heggra, partly in revenge for the fact that she had killed the woman he’d loved, and assumed leadership of Apokolips.

Bent on universal domination and motivated by his quest for the Anti-Life Equation, a mathematical formula that proves life is hopeless and can rob any life form of their free will, Darkseid has made many enemies, including the heroes Lightray and Mr. Miracle and his own son Orion, the "dog of war." Darkseid’s attentions later turned towards the planet Earth when he became convinced that human beings held different parts of the Anti-Life Equation hidden in their minds. This brought him into conflict with many super-heroes as well.

Until recently in Final Crisis, he was never successful in conquering Earth, true. But that didn’t mean he never got the better of a hero ever before.

Here then are six moments where Darkseid got to laugh at the failure of his enemies and his own dark power.

6. "No One Espaces the Finder Beams!" 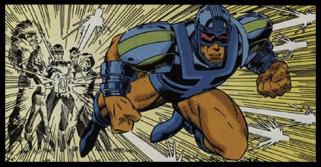 When Darkseid became master of the Omega Force, he left his brother Drax for dead. Years later, Drax became the cosmic hero the Infinity Man and could be summoned into existence by a group of young New Gods who called themselves the Forever People. As the Infinity Man, Drax could now give guys like Superman and Captain Marvel a good tussle and so he dedicated himself to fighting Darkseid.

Sadly, things didn’t work out quite as well as Infinity Man hoped. When he confronted Darkseid, the villain not only defeated him but then exiled the hero into another friggin’ dimension, cut off from all contact with the universe. And then, since the Forever People needed to act in unison in order to summon him, Darkseid used his cosmic "finder beams" to exile each of them into a different place in time and space. The heroes never had a chance and the Destroyer barely even broke a sweat from having to take care of the pests. It was months before the Infinity Man and the Forever People were able to regroup. 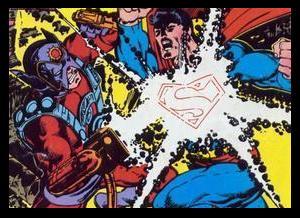 After arriving on Apokolips, Superman wound up getting attacked by a parasite and then fell head-first into one of the planet’s fire pits. The energies weren’t enough to kill him, but they (and the parasite) did weaken him and dull most of his memories. Darkseid became aware of this and decided, hey, let’s have a little fun.

First, Darkseid sent his agent Amazing Grace to befriend Superman. Under her influence, Clark gathered together a small rebellion and they made an attack against Darkseid’s forces. But of course, thanks to Amazing Grace providing him with information, Darkseid was fully aware of the attack and was able to kill off the small army of rebels. He had purposely manipulated Superman into inspiring hope just so that he could then crush it, ensuring that his subjects were even more broken than before.

Afterward, Darkseid took in Superman and manipulated his mind. Giving him armor and renaming him "Savior", Darkseid convinced Kal-El that he was the hero’s father. Now believing that his own super-powers came from Darkseid’s will, Superman went forth as a soldier of Apokolips and fought against the heroes Orion and Lightray. So deep was his mental programming that it was only with the help of the living computer Mother Box that Kal-El’s will was restored. The Last Son of Krypton laid down some destruction and then returned to Earth, horrified that someone was able to twist him into a weapon for evil. 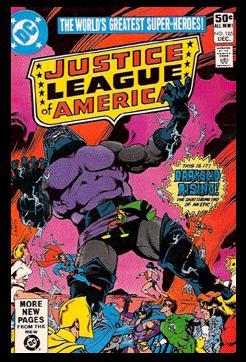 The Justice League and their predecessors, the Justice Society of America, were getting ready to have a nice social gathering when suddenly they were all transported to the planet of New Genesis. Highfather and Metron explained that they needed the heroes’ help. Darkseid was up to something and he’d recruited the super-villain team the Injustice Society to help his army keep the people of New Genesis off his back.

The JLA and JSA were forced to fight tooth-and-nail not just against super-villains but against para-demons and Darkseid’s soldiers, such as the sadistic Granny Goodness. Batman and Mr. Miracle had to use all their combined wits to escape several death-traps and despite the fact that the had powerhouses such as Superman, Power Girl and Firestorm, the heroes nearly lost against Darkseid’s scheme to destroy a universe.

This story was one of the first to have Darkseid prove he could be a threat to the rest of the DC Universe and showed just how high stakes could get when he was around. And even though the villain’s plan was defeated in the end, folks like Power Girl would still talk about it years later, reliving the terrible memories of this battle and speaking of how bittersweet the victory had been since the heroes knew that, despite their efforts, Darkseid’s forces would continue to rule Apokolips after they left.

Raker Quarrigat was a Green Lantern who found himself in the realm of the Fourth World. Seeing the evil of Apokolips, he attempted to combat Darkseid’s forces. Not wasting anytime, he flew into Darkseid’s throne room and explained that on his finger was a GL power ring, one of the most powerful weapons in all the universe and he would be forced to use it if the bad guys didn’t fall in line. 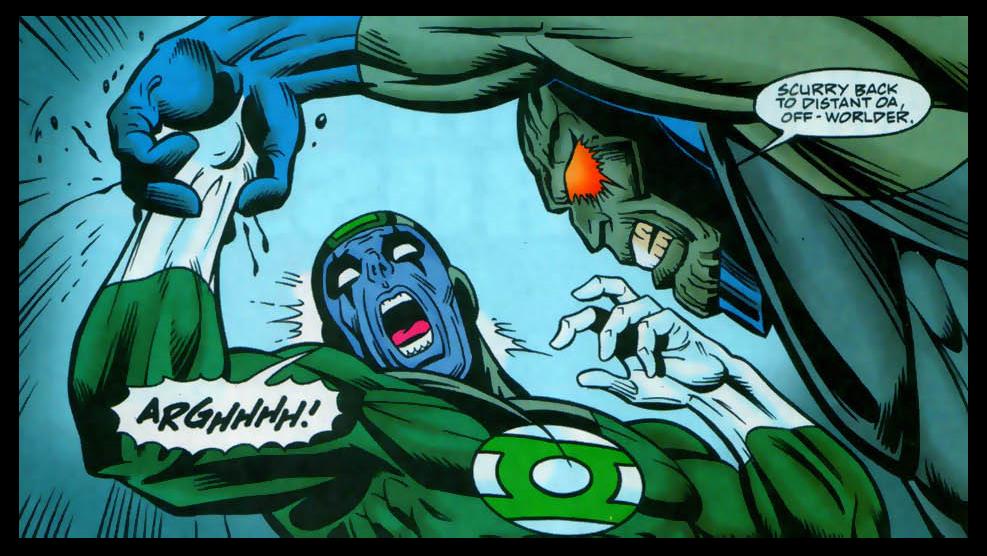 Darkseid responded by quickly getting up and grabbing Raker’s hand, crushing it in his grasp and breaking the power ring in the process. As Raker writhed in pain, the Destroyer calmly told the GL to go fly back home to his masters, the Guardians of the Universe, and explain that the Fourth World was not their concern. He then handed the remains of the power ring over to his torturer/scientist Desaad for study.

This was during the early days of the Green Lantern Corps, when there were only a handful of agents with power rings. After having faced Darkseid, Raker suggested that the Corps needed to grow in strength and so the Corps expanded to 3600, one Green Lantern for each designated sector of space. After training the new recruits, the Guardians sent them and Raker back to Apokolips. But Desaad had discovered the rings were ineffective agaisnt the color yellow and so Darkseid and his forces had all equipped themselves with golden armor. What followed was a slaughter.

Although Raker was willing to continue fighting with more conventional weapons, the Guardians arrived and arranged a truce with Darkseid, recognizing that his slaves and subjects the "Hunger Dogs" would not know what to do with freedom and were emotionally dependent on their ruler. Raker was left on the planet and his story was erased from the Green Lantern history texts. In every way possible, Darkseid had won.

You may think things are bad right now in Final Crisis, but in that story the forces of evil have only been in charge for about a month. During Grant 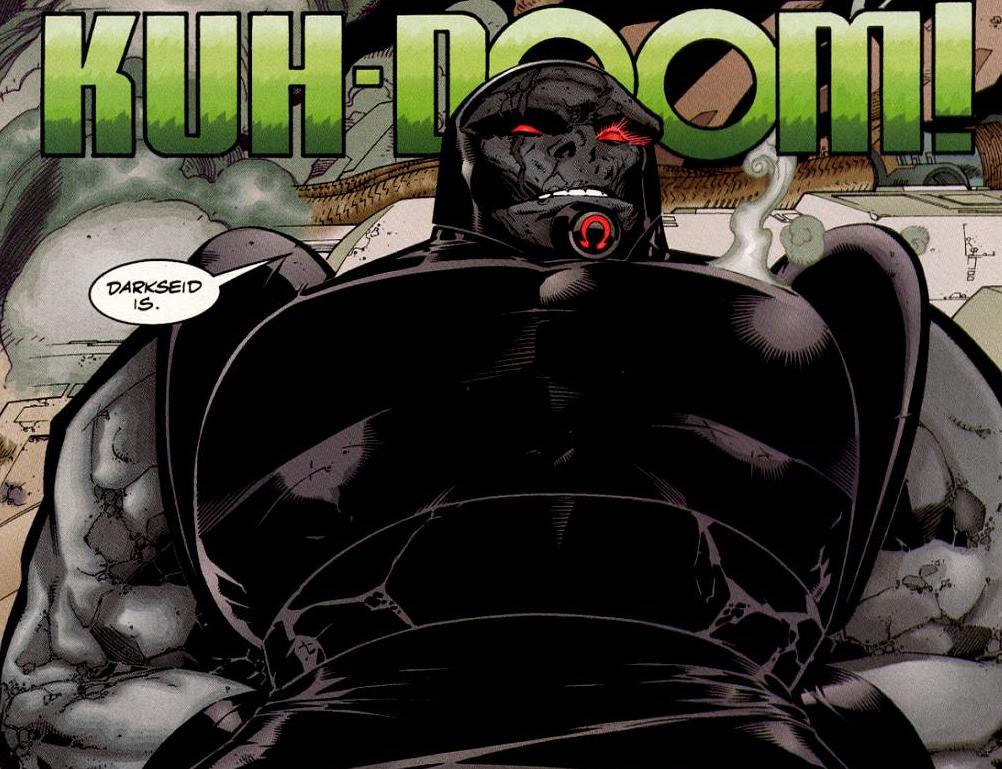 Morrison’s run on JLA, Aquaman, Flash and the Green Lantern Kyle Rayner all wound up fifteen years in the future. In this possible timeline, Darkseid had taken over the Earth and had been in charge for over a full decade. Batman? Captured. Superman? Dead. In fact, over 90% of Earth’s superhumans, both good and bad, were all gone.

Yes, the story ended with Darkseid being defeated and the trio of heroes going back in time to make sure these events never happened. But that doesn’t change a basic truth. Darkseid did it. He destroyed New Genesis, he defeated Earth’s champions, and he was able to hold the Earth enslaved for over ten years without facing any real challenge. That’s a victory, folks.

Aside from a handful of superhumans, there wasn’t even any real rebellion. Human slaves wandered around with "see no evil, hear no evil, speak no evil" helmets, the Anti-Life Equation guiding their bodies and killing all hope and telling them the same thing over and over again. Darkseid is justification. Darkseid is life. Darkseid is self. 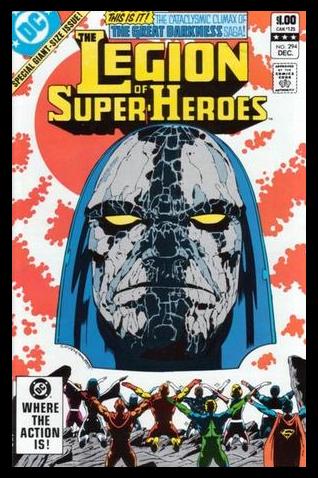 Before the events of the Crisis on Infinite Earths altered time and history, it was revealed to readers that Darkseid would survive into the 30th century, during the time when the Legion of Super-Heroes would be in operation. Not only that, but he would wage one of his greatest campaigns there.

The dark wizard Modru is a villain capable of providing a good fight for both the Justice Society and the Legion of Super-Heroes all by his lonesome. Darkseid killed him. The Time Trapper was a master manipulator of time energies and had cuased havoc for the Legion and for Superman. Darkseid murdered him as well. Then, he conquered the planet Daxam and turned its inhabitants into an army. When you consider that Daxamites get Kryptonian-level abilities when under a yellow sun, this is very, very bad. Having now amassed his power, he began his campaign against the heroes of the future.

And if you’re not impressed with the fact that he took out two of the Legion’s greatest foes all by his lonesome, don’t worry. Because then Darkseid targeted two of the Legion’s founders, Lightning Lad and Saturn Girl, who were now married and were expecting twin children.

For years, the Legion had fought a group of villains called the Fatal Five, one of whom was a monstrous killer named Validus. During the "Great Darkness Saga", Darkseid kidnapped one of Saturn Girl’s newborn twins and corrupted him, warping him into a freak and then sending him into the past under the new name Validus. Saturn Girl was faced with the horrible realization that not only had her child been taken from her, but she had already spent years fighting him as a deadly enemy. Darkseid enjoys delivering emotional blows and few were as devastating as this.

Alan "Sizzler" Kistler once thought he woke up in Apokolips, but it turned out to just be a bar in Los Angeles. He has been recognized by Warner Bros. Pictures and mainstream media outlets such as the New York Daily News as a comic book historian, and can be seen in the "Special Features" sections of the Adventures of Aquaman and Justice League: New Frontier DVDs. His personal website can be found at: http://KistlerUniverse.com. One of these days he’d love to write for DC, Marvel or Doctor Who.