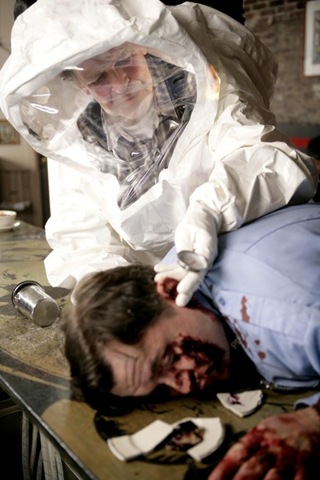 Autopsy Report: “[[[The Cure]]]”
From Fox: “After weeks of being reported missing, a woman with a rare disease resurfaces in suburban Massachusetts and inexplicably causes excruciating pain and subsequent death to those she encounters. As the gruesome scene is investigated, dangerous levels of radiation are detected, and unusual circumstances surrounding the case point to illegal human drug trials and possibly something even more sinister. Meanwhile, Walter obsesses about cotton candy, Peter strikes a bargain with Nina Sharp and a startling piece of Olivia’s past is revealed.”

Doctor’s Notes
Last week’s [[[Fringe]]] was a remarkable letdown. Fresh off the heels of “The Arrival,” the season’s greatest episode, Fringe turned in “Power Hungry,” a colossally boring hour of television and certainly the worst installment in the series. This week, things get back on track in “The Cure,” offering excellent development in terms of plot and character.

In “The Cure,” a woman walks into a diner in suburban Massachusetts and has a radioactive freak out resulting in the very bloody deaths of herself and everyone around her. Olivia and her team investigate the incident, learning that the woman had a rare disease shared by another woman named Claire, and the disease was being combatted with an obscure radioactive treatment. Olivia discovers that they’d been kidnapped by Intrepus, Inc., a rival corporation to Massive Dynamic, where they were experimented on and essentially turned into human weapons of mass destruction. Olivia naturally saves the day, but sacrifices are made in the process that are sure to haunt the team in the future. 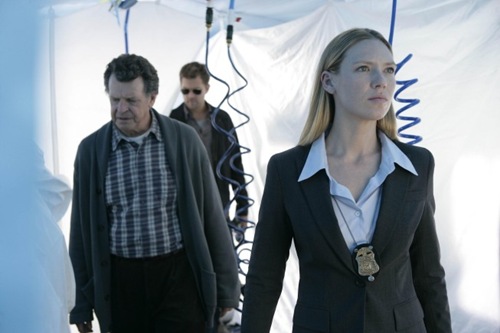 To date, John Noble’s Dr. Walter Bishop has taken center stage as the best character on the show. In this recent episode, however, it’s Anna Torv as Olivia Dunham that steals the show. This episode is all about Olivia, focusing on her past and present, even insight into her future. During the events of “The Cure,” Olivia quietly celebrates her birthday without telling the others. This is because Olivia’s birthday is not a happy occasion. She confesses to Peter that as a nine year-old girl, her step father abused her mother on a regular basis. After one particularly brutal encounter, young Olivia shoots her step father repeatedly but can’t bring herself to kill him, despite his goading her to do so. Olivia says that her step father escaped and has sent her a birthday card every year to let her know that he’s still at large. At the episode’s conclusion, Olivia returns home to find that very birthday card slid under her door.

And that’s what makes good television. It’s not the high science, it’s not the mystery of the week, but the character development that really pushes a series from pure entertainment to greatness. Granted, this isn’t the most awe-inspiring character reveal of all time, but it’s an excellent step in the right direction for Fringe. “The Arrival” introduced The Observer, and “The Cure” introduced the concept of Olivia’s step father, a character that is sure to plague our heroes in the future. I can’t wait for Olivia to get her second chance to put that fatal bullet in her step father.

Olivia also gets a chance to interact with Lance Reddick’s Philip Broyles. For the first time since the pilot, Broyles turns up the venom against Olivia. In recent episodes, the two have had a mutually respectful relationship. Broyles is clearly thrilled with the results Olivia has produced thus far, but her emotional reactions against the villainous David Esterbrook, the Intrepus, Inc. executive responsible for this week’s crime, push Broyles in the wrong direction. Lance Reddick has one of the most menacing stares in the acting business, and it’s fantastic to see him unleash that glare upon Olivia. Broyles has been too passive in recent episodes. It’s far more interesting when he’s got his angry face on. 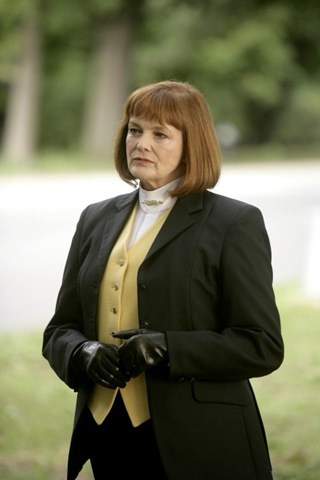 Olivia even has a tender moment with Peter Bishop. A consistent arrogant jerk throughout the series so far, Joshua Jackson finally gets a chance to turn up the charm. He’s there for Olivia when she needs to talk about her wicked stepdad, and he’s there again for her in the episode’s closing moments. It’s clear that Olivia isn’t interested in any sort of relationship with Peter, but his not-so-subtle “I hate to see you go, but I love to watch you leave” moment at the episode’s end gives the audience a hint that romance might not be too far off. Adding further to that angle is Peter’s risky bargain with Nina Sharp, the partially bionic Massive Dynamic executive. She offers to tell him where Esterbrook is keeping Claire, the radioactive woman. In return, Nina can ask Peter a favor at any time in the future with no questions asked. Peter accepts, despite the clear risk to himself. If that ain’t love (or, at least, lust) then I dunno what it is. It’s also a nice twist that’s sure to pay off later in the series, giving fans something to look forward from Peter Bishop.

Even though Fringe is often unbalanced in terms of story and character development, the show has a solid track record of presenting some of the most grotesque scenes on network television. Last week’s grizzly factory accident pales in comparison to this episode’s opening scene. Not only is it a complete bloodbath, but you really feel for the diner patrons, since it’s obvious that something terrible is about to befall them. It’s an excellent scene that leads to an even more gruesome image: the headless corpse of the radioactive woman, Emily Kramer. All that’s left of her head is her lower jaw with a scant three teeth still intact. The camera lingers on the body for maybe a full second, which is a full second longer than anyone would ever expect to see on network TV.

And, as always, Walter Bishop gets the line of the night. This time, in remembering which color toothbrush he has, he smilingly recalls: “White for Walter.” Genius.

Verdict: A-
Fringe rebounds from its weakest episode with an incredibly strong effort. Significant storymoves, pure shock value and excellent character work, particularly with Olivia, set “The Cure” as one of Fringe‘s top episodes to date.

The Next Case: “In Which We Meet Mr. Jones”
By the time Fringe‘s newest episode airs, either the Tampa Bay Rays or the Philadelphia Phillies will be the new World Series champions, and a new President of the United States will have been elected. Both of these momentous occasions will pale in comparison to Peter Bishop’s communion with dead people in the November 11 episode of Fringe titled “In Which We Meet Mr. Jones.” Seeya then!