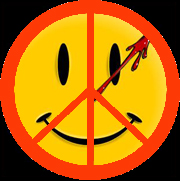 My brother had a Sportsman McCain sticker on his car, but I wasn’t worried. The night before, a nice young man in a bookstore, a complete stranger, gave me a big peace button and with that pinned to my vest, I was pretty sure I was safe from the McCain vibes, even though we were in a red state.

I watched Sarah Palin on Saturday Night Live a few hours later, and although I thought she handled the comedy okay, and my dirty old man merit badge glowed just a tiny bit, I was and am not tempted to vote for her, no siree, and so I guess the peace button was potent even indoors.

Who might that nice young man have been? Merlin? Galahad? The ghost of Thomas Jefferson? Or, given that I was in St. Louis, land of the mighty arch and my childhood, the ghost of my own naïve, youthful dreams?

Ah well. No matter. What’s important is that the peace button/amulet did its stuff.

As a shield against the dark enchantments of McCain and Palin, it did its stuff. In other areas…not so good. At this moment, our luggage is somewhere between White Plains Airport and Dulles, or between Dulles and Lambert Field, or in a terminal or storage facility in one of those three terminals. This provides me with an absolutely unnecessary reminder of one of several reasons why I hate commercial flying. Or – could it be? – our bags are in a sub-basement of the Republican National Headquarters where Palin herself is squirting my moustache wax from the little tube, seeking the secret of how I resisted her SNL appearance. (Rest easy: she won’t find it. The peace button was in my carryon.)

And what, the inquisitive among you might be asking, has any of this to do with comics, popular culture, or even real politics, for it seems to be less concerned with any of those things than an Andy Rooney kvetch about how expensive goods are nowadays has to do with the Gross National Product. Fair question. Answer? Let me see…Okay, try this.

While I was in Missouri, I spoke on how comic books have evolved since their a’borning circa 1935 until now. The talk was at Jesuit high school, which I find mildly remarkable because in my day – here we go, channeling Andy – creaky galoots like me did not befoul Jesuit stages with blather about popular culture – did the term even exist then? – and especially blather about such a lowlife amusement as funny books. But there I was, center stage, mike in hand, blathering. Even cracked wise about my hippie-peacenik politics without eliciting mobs with torches. And then answered intelligent and friendly questions.

But you don’t care about any of that and I don’t blame you and, yes, this is a pretty lame excuse for a column. Imagine me beating my chest with a loose fist and murmuring mea culpa (which, come to think of it, isn’t a bad murmur in a piece that mentions the Jesuits) and promising to do better next week when I’ve untensed from flying so high in the sky and have stopped being furious about the luggage.

Dennis O’Neil is an award-winning editor and writer of Batman, The Question, Iron Man, Green Lantern, Green Arrow, and The Shadow– among many others – as well as a whole lot of novels, stories and articles. The Question: Epitaph For A Hero, reprinting the third six issues of his classic series with artists Denys Cowan and Rick Magyar, will be on sale any minute now, and his novelization of the movie The Dark Knight still stalks the stacks. Denny’s written a new Batman story arc called “Last Days of Gotham,” starting in Detective Comics #851 (on sale December 3rd) and concluding in Batman #684 (on sale December 24).