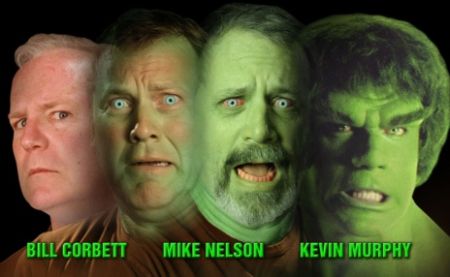 Remember sitting through any particularly bad episode of The Incredible Hulk and thought to yourself, "Boy, this would be great for Mystery Science Theater!"? Well, look no further because Mike Nelson and his band of riffers from RiffTrax.com have decided to take on the very first episode of season one entitled "Final Round".

RiffTrax, for those not in the know, is a website where you can buy MP3’s of the cast of Mystery Science Theater 3000 (Mike Nelson, Bill Corbett, and Kevin Murphy) doing what they do best for movies that deserve it. After purchasing the Riff MP3, you then synch it up to the movie you purchased, like a makeshift commentary. With a selection ranging from Plan 9 From Outer Space to Ben Affleck’s Daredevil, you can purchase each "podcast" and watch it along with your DVD in the comfort of your own home. In a new deal, Rifftrax has partnered up with Overcast Media who will pre-synch the RiffTrax onto content posted for free by Hulu.com. This episode of Hulk is being offered for free as a Beta test and those who check it out are asked to give their feedback on how the service worked.

In the episode, Bruce Banner, going under the name David Benson (ugh) gets saved from muggers by local boxer "Rocky" (no relation) . Later Banner becomes Rocky’s friend and corner-man and uncovers a plot by Rocky’s manager for him to mule drugs. Not only do we get Martin Kove playing "Rocky", who is best remembered as the instructor who told Johnny to "sweep the leg" in Karate Kid, but we also get Ferrigno in green jumping in the ring to beat on the baddies!