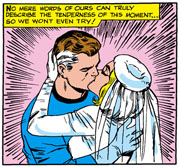 I guess we’ll have to get our superhero fixes from comic books for a while, though I’m not complaining, because isn’t that the way it’s supposed to be? My glances through the various newspapers and magazines that come to this house tell me that there are no superhero movies coming to a theater near me, and the closest thing to a new superhero on television is those can-do wheels on Knight Rider, whose ancestor is the Batman utility belt of the middle-period comics and the early Green Arrow quiver; whatever the situation calls for…well, here it is – just the thing. Some of last season’s superdoers are back, and some of them will be on our living room screen, though the plot(s) of one seem to be unfocused and the future of another, The Sarah Conner Chronicles, seems to be iffy, which saddens me because one of the stars makes my dirty old man merit badge pulsate.

Superheroes and summertime seem to be yoked. As usual, commerce rather than aesthetics seem to be the reason. Until recently, and maybe even now, publishers felt that their comic book audience – kids – had more disposable income and more leisure during the hot months and so they saved their annuals and double-sized issues and important stories – Reed and Sue get married! – for the time when the young’uns lucky or unlucky enough not to have jobs didn’t recite the pledge of allegiance every morning.

(Ah, I can remember – or almost remember – the feel of the cool concrete of a front porch under my prone body as I looked at the funny book and wondered why his shirt was red if his name was Green Lantern and couldn’t his cape at least be green? Was there an editor in the making here?)

As with comics, so with movies. Summer = money that doesn’t need to be spent on crappy stuff like bus fare + hours that didn’t have to be wasted on crappy stuff like homework = who’s up for some mindless entertainment? – and off to the multiplex we go. So theater guys tend to program effect-heavy shows without a lot of intellectual content for the same months that publishers are pushing their annuals.

The “mindless entertainment” part of the equation, by the way, may have to be revised. At least two of the glut of recent super heroic films had subtext and thematic elements that qualified them as Serious.

(Full disclosure: The films are Iron Man and The Dark Knight and although I did a monetization of one and contributed a character to the other, I had absolutely nothing at all to do with the plot and/or story of either. So when I praise them, I’m praising talented folk who aren’t now and never have been me.)

Of course, some might argue that superhero stories have had serious subtexts all along, for better or worse, and I’m not sure I’d want to contradict them. Maybe the big change is that now we don’t have to dig to find the parts that aren’t frivolous.

RECOMMENDED READING: The Story of Philosophy, by Will Durant.

Dennis O’Neil is an award-winning editor and writer of Batman, The Question, Iron Man, Green Lantern, Green Arrow, and The Shadow– among many others – as well as a whole lot of novels, stories and articles. The Question: Epitaph For A Hero, reprinting the third six issues of his classic series with artists Denys Cowan and Rick Magyar, will be on sale any minute now, and his novelization of the movie The Dark Knight still stalks the stacks. He’ll be taking another ride on Batman in an upcoming story-arc, too.