Smoke Gets In Your Brain, by Dennis O’Neil

Smoke, smoke, smoke that cigarette / Puff, puff, puff until you smoke yourself to death. / Tell St. Peter at the Golden Gate / That you hate to make him wait, / but you just gotta have another cigarette. – Merle Travis 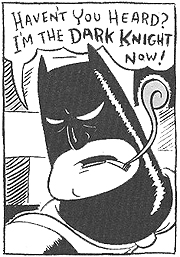 I was getting ready to leave the office and walk over to NBC, where I planned to tape a reply to someone who had accused Batman of being in league with the Big Tobacco. It seems that in one panel Batman is standing on a roof, and in the background, on another roof, there was a billboard with a fragment of what might have been a cigarette ad visible. Our accuser said that putting Batman proximate to a cigarette image amounted to Batman – and his creators – endorsing tobacco products and advocating their use to children.

Well, no. Had I kept my rendezvous with the microphones and cameras, I would have probably observed that we agreed that smoking was bad and none of our characters ever actually smoked – Bruce Wayne abandoned his pipe early in his career – and, in fact, we had just done a pro bono anti-smoking ad for the American Heart Association. I might have taken my screed just a bit further and argued that we had always presented Batman’s turf as a realistic American city and – sorry! – urban areas are full of cigarette ads.

I didn’t have to do any of that. At the last moment, cooler heads prevailed and said that if I went on the air, our accuser would answer my answer and prolong the story’s life, whereas if we simply ignored it, the story would not survive into the next news cycle, which is exactly what happened.

One might ask why I allowed the billboard to appear in the first place. For the sake of realism? Or did I just miss it when I edited the artwork? Or did I see it and decide it wasn’t worth the hassle of a change? Humbling answer to all of the above: I don’t remember.

But this pretty inconsequential incident does raise another question: Where do the obligations of good citizenship and moral behavior end and the obligations to storytelling begin? Some kinds of people smoke and drink and take drugs and they’re not all hideous monsters, and some kids are influenced by what they experience through the media. I’ve heard recovering alcoholics say that the movie images of glamorous, witty sophisticates swilling booze prompted them to emulate the swillers and led, eventually, to badly damaged lives. But people do drink, and in a fictional world that mirrors the real one, shouldn’t drinkers – and smokers and druggies – be presented? Or does the potential harm of these behaviors outweigh aesthetic and narrative considerations?

Sometimes, the coexistence of storytelling and responsible citizenship is painfully troubled, and sometimes I’m glad I no longer sit in an editor’s chair.

RECOMMENDED READING: The Courtier and the Heretic: Leibniz, Spinoza, and the Fate of God in the Modern World, By Matthew Stewart.

Dennis O’Neil is an award-winning editor and writer of Batman, The Question, Iron Man, Green Lantern, Green Arrow, and The Shadow– among others – as well as many novels, stories and articles. The Question: Epitaph For A Hero, reprinting the third six issues of his classic series with artists Denys Cowan and Rick Magyar, will be on sale any minute now, and his novelization of the movie The Dark Knight is on sale right now. He’ll be taking another shot at the ol’ Bat in an upcoming story-arc, too.

Artwork by Kim Roberson, from Underworld.