True Blood Gets Renewed For Season 2 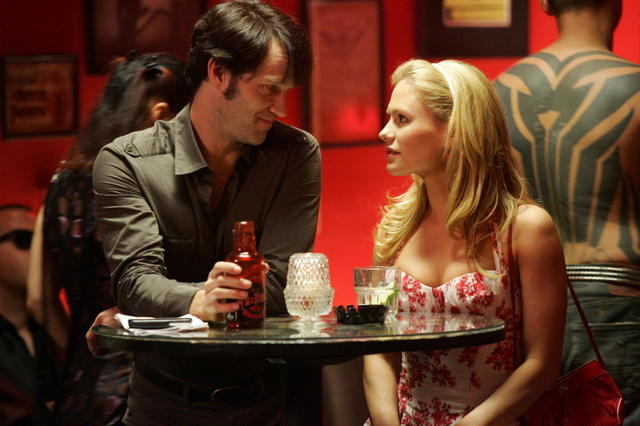 Looks like the fans of Six Feet Under have more power than they even thought. After several stunning reviews (though this contributor felt differently) HBO explains it all in a press release:

LOS ANGELES, Sept. 17, 2008 – HBO has renewed the new drama series TRUE BLOOD for a second season, it was announced today by Michael Lombardo, president, Programming Group and West Coast Operations. Created by Alan Ball, the series will begin production of new episodes early next year in Los Angeles, with debut set for summer 2009.

"We are absolutely thrilled that the critics and our viewers have embraced TRUE BLOOD," noted Lombardo. "Alan Ball has done it again – made an addictive series that is unlike any other."

"I am thrilled to be able to continue to work with such a talented group of writers, cast and crew to explore the characters and world created by Charlaine Harris in her novels," Ball said. "It really is a joy to go to work every day and I couldn’t be happier to be back home at HBO."

The Sept. 7 debut episode is proving to be a hit with HBO audiences, attracting more than four million viewers to date, while the debut of the second episode on Sept. 14 posted an unprecedented 24% gain in viewers over the first week’s debut.

Critics across the country in Detroit, Baltimore, Denver and Orlando have proclaimed TRUE BLOOD one of the best new shows on TV. USA Today called it "wildly imaginative," with "one of the best ensembles of the new series," while the Washington Post found it "audacious, outrageous and playfully grisly." TV Guide hailed the show as "graphically sexy and scary, and often wildly funny," and "a broadly entertaining, deliciously twisted slice of modern Southern Gothic."

Mixing romance, suspense, mystery and humor, TRUE BLOOD takes place in the not-too-distant future, when vampires have come out of the coffin, thanks to the invention of mass-produced synthetic blood that means they no longer need humans for their fix. Set in a backwoods Louisiana town, the show follows the romance between waitress Sookie Stackhouse (played by Anna Paquin), who can read minds, and 173-year-old vampire Bill Compton (played by Stephen Moyer). Alan Ball (creator of the Emmy(r)-winning HBO series "Six Feet Under") created and executive produced the show, as well as wrote and directed episodes of the series, which is based on the popular Sookie Stackhouse novels by Charlaine Harris.