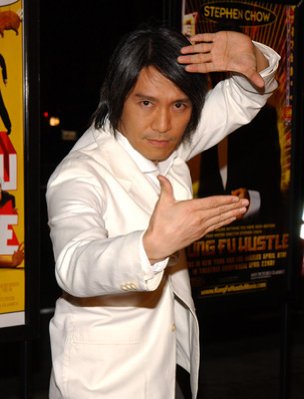 Feels like it is hard to believe that when you say a name like Green Hornet, the first actor to come to mind is Seth Rogen, but it looks as if that may just become a reality now. Rogen and writing partner Evan Goldberg have finally serenaded Hong Kong legend Stephen Chow enough in wanting him to don the eye-mask as Kato, Hornet’s driver and not-so-side-kick, that it looks like Chow will also be taking the helm as director.

Stephen Chow is well known globally for his slapstick comedy style in such films like Shaolin Soccer, and Kung Fu Hustle (both also directed by Chow). Those who are familiar with his work know that Chow is a big fan of zany slapstick a-la classic Merry Melodies, and well as being a student of serious Kung Fu. When approached about the new role, Chow had this to say:

I’m excited to be taking on ‘The Green Hornet’ — obviously, I’ve been a huge fan of the show since I was a kid. The idea of stepping into Bruce Lee’s shoes as Kato is both humbling and thrilling, and to get the chance to direct the project as my American movie debut is simply a dream come true. I’m grateful to my friends at Sony, who have shown so much faith in me for so many years. I’m looking forward to working with Seth, Evan, Neal, and the team at Sony, and I’m eager to get started.