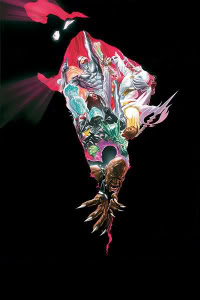 Kurt Busiek’s brain is about average-sized, I assume. And yet it contains this entire city, detailed down to every last resident’s personality and scrap of trash in the street.

His mastery of [[[Astro City]]] is on full display in the latest collection of the WildStorm series, The Dark Age

($29.99). Busiek ventures back to the not-so-pleasant past to tell the story of two brothers who go on very different paths amidst the chaos of superheroes and villains.

We’ve seen plenty of examples of superhero stories told in a down-to-earth way, or viewed from the average man’s perspective, maybe most notably in Busiek’s acclaimed [[[Marvels]]] with Alex Ross (who provides the killer cover at right). Neither of those elements is what sets Astro City apart, though they fuel its success.

Rather, its the depth to which Busiek explores the brothers’ lives (and those of everyone else). Charles and Royal Williams go through childhood tragedy and end up on opposite ends of the law.

Each is plagued in his own way by the super-powered element, with the bombastic battles tearing Astro City apart.

Without making overt references to reality, Busiek effectively captures the depressing and unstable atmosphere of the United States in the 1970s. Those issues are simply exaggerated when the battles of near-gods literally threaten reality; just a fantastical reenactment of Kennedy’s standoff with the Russians.

Parallel to the brothers’ tale is the story of the Silver Agent, Astro City’s champion who undergoes his own dramatic crisis, and even more dramatic return.

He’s just one of dozens of cape-wearing, powered people, and while some of them bear similarities to existing characters, they’re entirely their own entities. And Busiek gives each of them a distinct personality and history.

You don’t have to read much into the collection to feel like Astro City must be a real place that you could visit for a long weekend (if you dared).

It seems more than a little tragic, then, that Busiek is so caught up writing other peoples’ superheroes that he can’t dedicate himself to bringing Astro City stories out on a regular basis.