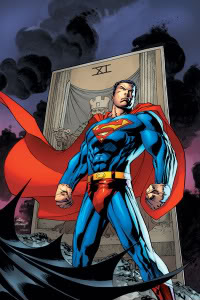 The backup begins with Dick facing Swashbuckler, and they fight to something of a duel, though you couldn’t tell from Scott McDaniel’s confusing page layouts, which make it look like Dick and 16 clones are fighting Swashbuckler (who, unfortunately, does not dress like a pirate).

Then the owner of the hand, Trans-Volitional Man, steals the Joker’s laugh. Yes, really.

Is this [[[Trinity]]], or is this the Official DC Guide to Lame Villains?

I’d go into some analysis, but there’s nothing worth talking about this issue. Until next time…