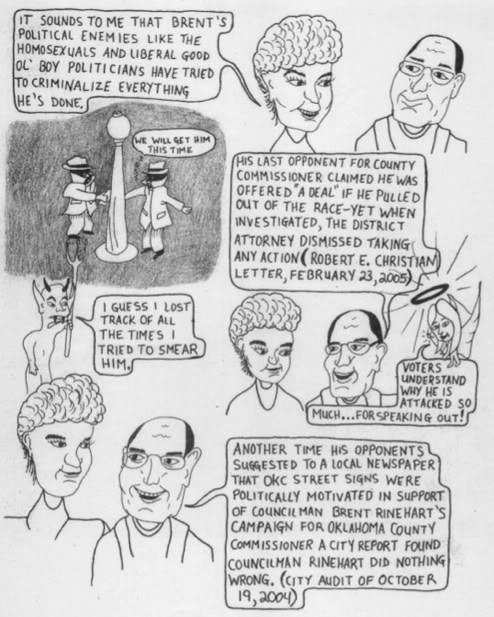 You might remember Brent Rinehart, the Oklahoma county commissioner who mailed a crudely drawn and deeply offensive comic (one page at right) to voters in the hopes of winning reelection.

Well, he lost. And lost badly. From the Olkahoman:

The embattled and controversial Rinehart received only 21 percent of the vote and failed to make a runoff in the Republican primary.

“Too many hurdles. Mountain too high. Too many battles,” Rinehart said. “You hope throughout everything that the public sees and understands and so you do your best, and I’ve done my best.”

Rinehart didn’t hold an election watch party Tuesday, instead opting to see “The Dark Knight” with his girlfriend.

Rinehart came in third out of three candidates amid allegations of criminal wrongdoings while he was in office.

He used the comic book to claim that homosexuals and Satanists and liberal good ol’ boys were responsible for the effort to keep him out of office.